US and Russia will not sit down together after Trump cancelled a planned meeting, citing Russia's seizure of Ukrainian ships and sailors. 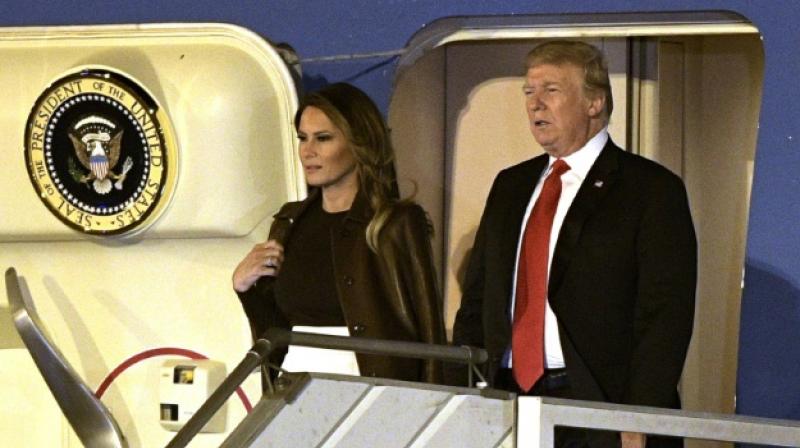 US President Donald Trump and US First Lady Melania Trump step off Air Force One upon their arrival in Argentina. (Photo: AFP)

Buenos Aires: G20 powers open two days of summit talks on Friday after a stormy buildup dominated by tensions with Russia and US President Donald Trump's combative stance on trade and climate fears.

Trump and his Russian counterpart Vladimir Putin will be among the world leaders gathering amid high tension over an array of world issues including the Ukraine conflict, trade with China and relations with Saudi Arabia.

But the two will not sit down together after Trump abruptly cancelled a planned meeting, citing Russia's recent seizure of Ukrainian ships and sailors.

Protesters have vowed mass rallies to harangue the world leaders gathering in crisis-hit Argentina, where recent violence between rival football fans raised questions about the police's ability to control unrest.

Trump landed in Buenos Aires on Thursday after stoking tensions by calling off the Putin meeting over the Ukrainian ships.

"I look forward to a meaningful Summit again as soon as this situation is resolved!" Trump wrote on Twitter.

His decision came as a US probe into Russia's role in Trump's election campaign intensified.

The Kremlin said it "regrets" Trump's decision to scrap the meeting.

Trump aimed to start the summit with a victory for his "America First" trade agenda, by having trade negotiators sign a successor to the North American free trade pact NAFTA, the US-Mexico-Canada Agreement (USMCA).

Trump declares it a victory on behalf of the US workers he claims were cheated by NAFTA.

Trump also has China in his sights as he prepares to meet President Xi Jinping on the G20 margins.

The United States has cast talks Saturday with Xi as a deadline for China to cave on key trade concerns of Trump.

The US leader has slapped $250 billion in tariffs on the Asian power and threatened more to come in January.

The G20 summit will be accompanied by an array of diplomatic initiatives with several bilateral meetings, including ones involving Putin, Japanese Prime Minister Shinzo Abe and Indian Prime Minister Narendra Modi.

German Chancellor Angela Merkel was to miss the summit's opening after her plane was forced to make an emergency landing in Cologne due to what she called a "serious" a technical problem.

She eventually took off on a flight from Madrid bound for Buenos Aires on Friday.

Her temporary absence could complicate French President Emmanuel Macron's attempts to build a European front against Trump at a meeting of EU leaders attending the G20 on Friday morning.

Macron on Thursday rejected those who wish to confront economic challenges by being "bellicose, isolationist and closing down borders."

Among the other leaders at the summit will be Saudi Crown Prince Mohammed bin Salman, the focus of tensions over the murder of one of his prominent critics in October.

Macron said he would raise the killing of journalist Jamal Khashoggi with the crown prince on the sidelines of the summit.

G20 sources said climate change was emerging as the biggest stumbling block to agreement on a joint communique when the summit concludes on Saturday.

Trump has yanked the United States out of the landmark Paris climate accord. His opposition to collective action stands in defiance of scientists' increasingly urgent warnings that policy action is desperately needed to counter the climate threat.

Macron meanwhile warned that France would refuse to move forward on a trade accord with South America's Mercosur bloc if Brazil's incoming far-right president, Jair Bolsonaro, also pulls out of the Paris climate accord.

With a major UN meeting on climate change starting next week in Poland straight after the G20, UN chief Antonio Guterres said in Buenos Aires that "this is a make-it-or-break-it moment."

Two major summits this year, of the Group of Seven democracies and the Asia-Pacific Economic Cooperation forum, ended without the once-routine statements.

"Will we even have a communique? It really is an open question," said former Canadian negotiator Thomas Bernes, a senior fellow at the Ontario-based Centre for International Governance Innovation.

Following the USMCA signing, and once Argentina's President Mauricio Macri has opened the first of the summit's two days, a mass protest is planned in central Buenos Aires on Friday afternoon.

Argentines are grappling with soaring inflation and unemployment. An economic crisis has led to a deeply unpopular bailout from the International Monetary Fund.

"There's a lot of people who don't have houses and don't have work. They are not focusing on the people who have needs," barber Ariel Villegas, 47, said at one protest Thursday outside the Argentine Congress building.

The government is vowing zero tolerance of violence as it hosts its biggest ever international gathering. It says it has won promises from the protest organizers to keep the streets calm.