The US President has threatened North Korea with “fire and fury” if it continues to work toward an ICBM capable of carrying a nuclear payload. 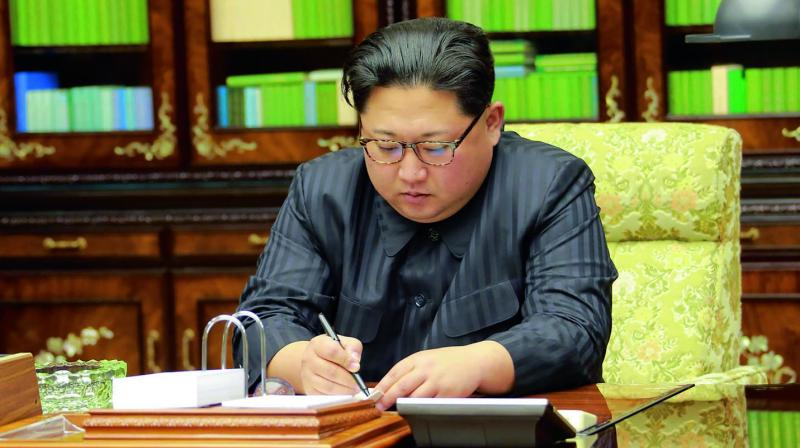 Washington: US President Donald Trump pledged to “take care” of North Korea after its latest ballistic missile launch —the first after a two-month hiatus — which his Pentagon chief said was its highest yet, signifying an expanded threat.

The ICBM is believed to have flown a relatively modest 1,000 kilometers (620 miles) from North Korea, before splashing down harmlessly in the Sea of Japan. But defense secretary Jim Mattis said the missile went higher than ever before and was a step toward North Korea building missiles that can “threaten everywhere in the world, basically.”

“I will only tell you that we will take care of it, Trump said at the White House.

“It is a situation that we will handle,” he added, in remarks designed to show resolve, but which offered little clue of an immediate US response.

The US President has threatened North Korea with “fire and fury” if it continues to work toward an ICBM capable of carrying a nuclear payload.

A more than two-month pause in tests had prompted speculation about whether North Korea might be willing to embrace a negotiated solution to the nuclear standoff.

Shortly after Trump spoke, secretary of state Rex Tillerson said “diplomatic options remain viable and open” on North Korea — but they now appear to be further away than ever before.

Mr Mattis said South Korea had responded to the test by launching pinpoint missile strikes into the water — an effort to show North Korea that a true attack would bring a swift and crippling response.

Since coming to office, Mr Trump has ratcheted up the diplomatic and economic pressure on the regime of Kim Jong-Un.

He has pressed China to break trade ties with its dependent neighbor and has applauded countries for shuttering Pyongyang’s diplomatic installations, which have long been used to gather illicit finance.

Earlier this month, Mr Trump declared North Korea a state sponsor of terrorism — a symbolic move, but one which amps up diplomatic pressure on the regime.

“We have a very serious approach. Nothing changed,” Mr Trump said.

North Korean leader Kim Jong-Un said Wednesday his country had achieved full nuclear statehood after what he said was the successful test of a new missile capable of striking anywhere in the United States.

North Korean state television brought out Ri Chun-Hee, a star presenter who only appears for significant developments, to announce the landmark.

“Kim Jong-Un declared with pride that now we have finally realised the great historic cause of completing the state nuclear force, the cause of building a rocket power,” she said.

“The great success in the test-fire of ICBM Hwasong-15 is a priceless victory won by the great and heroic people of the DPRK,” she said, using the official abbreviated name for North Korea.

“The ICBM Hwasong-15 type weaponry system is an intercontinental ballistic rocket tipped with super-large heavy warhead which is capable of striking the whole mainland of the US,” the North’s official news agency KCNA said.

Pyongyang said the missile reached an altitude of 4,475 kilometres (2,800 miles) and splashed down 950 kilometres from its launch site.

At least one Western expert said the missile’s lofted trajectory suggested an actual range of 13,000 kilometres — enough to hit every major US city.

The US leader spoke by phone with both Japanese Prime Minister Shinzo Abe and South Korean President Moon Jae-In after Wednesday’s test to underline the global threat posed by North Korea.