Donald Trump suggested British PM Theresa May to focus on defending the United Kingdom rather than criticising him. 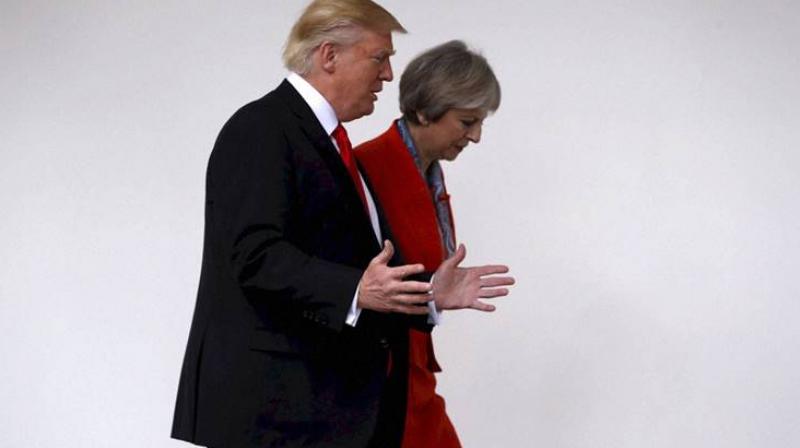 British PM Theresa May said through a spokesperson that US President Donald Trump was 'wrong' to promote the 'hateful narratives' of the group, British First. (Photo: AFP)

Plunging headlong into a high-profile spat with one of America's closest international partners, Trump suggested May focus on defending the United Kingdom rather than criticising him.

"@theresa_may, don't focus on me, focus on the destructive Radical Islamic Terrorism that is taking place within the United Kingdom. We are doing just fine!" he tweeted, after an earlier tweet with the same message used the wrong Twitter handle for May.

Trump had drawn fierce condemnation at home and abroad earlier in the day for retweeting three incendiary anti-Muslim videos posted by the deputy head of a British far-right group who has been convicted of a hate crime.

May said through a spokesperson that Trump was "wrong" to promote the "hateful narratives" of the group, British First.

He has infuriated British authorities with his tweets on terrorism in Britain, including highly publicized run-ins with London's Muslim mayor Sadiq Khan.

Khan on Wednesday described Britain First as "a vile, hate-fuelled organisation whose views should be condemned, not amplified."

Before Trump's latest missive, the White House had scrambled to limit the fallout, saying that even if the anti-Muslim videos were misleading, the president was pointing out a real problem.

"The threat is real, and that's what the president is talking about," said White House spokeswoman Sarah Sanders.

Deputy spokesman Raj Shah also defended Trump's actions: "It's never the wrong time to talk about the security and safety of the American people. Those are the issues he was raising in his tweets this morning."

One of the videos falsely claims to show a Muslim beating up a Dutch boy on crutches.

The Dutch embassy in Washington took the unusual step of publicly criticizing a sitting US president on Twitter.

"@realDonaldTrump Facts do matter. The perpetrator of the violent act in this video was born and raised in the Netherlands. He received and completed his sentence under Dutch law."

Another video is described as showing an Islamist mob pushing a teenager off a rooftop, without any context -- it appears to be footage filmed during unrest in Egypt in 2013. A man was executed for his role in the teen's death.

The third video allegedly depicts a Muslim smashing a statue of the Virgin Mary.

All three videos were originally posted by Jayda Fransen, deputy leader of the far-right group Britain First, which hailed Trump for his support.

"THE PRESIDENT OF THE UNITED STATES, DONALD TRUMP, HAS RETWEETED THREE OF DEPUTY LEADER JAYDA FRANSEN'S TWITTER VIDEOS!" the group tweeted in triumph.

"DONALD TRUMP HIMSELF HAS RETWEETED THESE VIDEOS AND HAS AROUND 44 MILLION FOLLOWERS! GOD BLESS YOU TRUMP! GOD BLESS AMERICA!"

Fransen was found guilty last year of a hate crime after hurling abuse at a Muslim woman wearing a hijab.

Britain First, which was formed in 2011 and is known for picketing outside mosques, has run and lost in several British and European parliament elections.

Brendan Cox, widower of MP Jo Cox who was murdered by a right-wing extremist last year, said: "Trump has legitimized the far right in his own country, now he's trying to do it in ours.

"Spreading hatred has consequences & the president should be ashamed of himself," he said.

Trump's behavior renewed calls for May to revoke an invitation for the American president to make a state visit.

David Lammy, a lawmaker for Britain's opposition Labour Party, said: "The president of the United States is promoting a fascist, racist, extremist hate group whose leaders have been arrested and convicted.

Conservative Minister Sajid Javid said Trump had "endorsed the views of a vile, hate-filled racist organisation that hates me and people like me. He is wrong and I refuse to let it go and say nothing."

Opposition leader Jeremy Corbyn said the retweets were "abhorrent, dangerous and a threat."

Trump's Twitter posts Wednesday were part of an early morning burst in which he again dismissed CNN as "Fake News" and insisted the US economy was in "record territory" by many measures.