“When the looting starts, the shooting starts,” Trump had written in a tweet that was quickly flagged by Twitter as “glorifying violence” 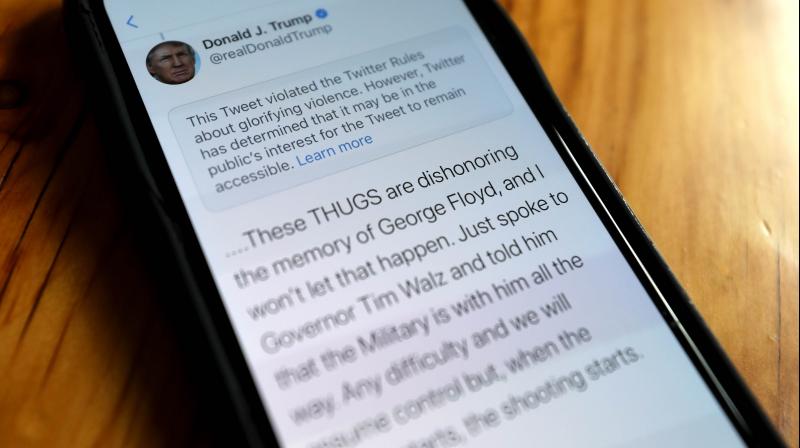 Washington: President Donald Trump spent Friday walking back his post-midnight “thugs” tweet about Minneapolis protesters that added to outrage over the police killing of a black man.

Trump’s later repeated condemnation of the killing and outreach to the man’s family was a marked change in tone from his earlier comments that also invoked a civil-rights-era phrase fraught with racist overtones.

“When the looting starts, the shooting starts,” Trump had written in a tweet that was quickly flagged by Twitter as violating rules against “glorifying violence.” Trump later said his comments had been misconstrued. “Frankly it means when there’s looting, people get shot and they die,” he said.

Trump’s whiplash comments came after protesters torched a Minneapolis police station on Thursday night, capping three days of searing demonstrations over the death of George Floyd, who was captured on video pleading for air as a white police officer knelt on his neck for over eight minutes.

And they underscored Trump’s complicated relationship with race as he tries to maintain a law-and-order mantle while looking to appeal to black voters during an election year. They also highlighted his refusal to avoid controversy or cede the spotlight even as the battered nation tries to make sense of another killing and reels over the mounting COVID-19 death toll.

Trump, in his tweets, borrowed a phrase once used by former Miami Police Chief Walter Headley in a 1967 speech outlining his department’s efforts to “combat young hoodlums who have taken advantage of the civil rights campaign.” In the speech, Headley said his department had been successful “because I’ve let the word filter down that when the looting starts, the shooting starts.”

“We don’t mind being accused of police brutality,” he said in the same speech, according to news reports from the time.

Trump, after hours of backlash, said Friday evening that he was unaware of the origins of the phrase. “But I’ve heard it for a long time, as most people have. And frankly it means when there’s looting, people get shot and they die,” he said.

Trump also revealed that he had been in touch with Floyd’s family as he continued to denounce the circumstances of the man’s killing, which he called “a terrible insult to police and to policemen.”

“I just expressed my sorrow,” Trump told reporters. “He was in tremendous pain, obviously, and couldn’t breathe. And it was very obvious to anybody that watched it.”

Still, Trump called on protesters to keep their demonstrations peaceful.

“The family of George is entitled to justice, and the people of Minnesota are entitled to live in safety,” he said. “Law and order will prevail.”

Criticism of Trump's tweet had been swift, with his presumptive Democratic presidential rival Joe Biden saying it was “no time for incendiary tweets, no time to incite violence.”

“It’s not helpful,” said Minnesota’s Democratic Gov. Tim Walz. “Anything we do to add fuel to that fire is really, really challenging.”

Rep. Emmanuel Cleaver, D-Mo., said that, as the country passed the grim milestone of more than 100,000 COVID-19 deaths, Trump had missed a chance to help the public cope with “two viruses: One is the coronavirus and the other is the virus of racial animus.”

Trump has been accused of stoking racial tensions and exploiting divisions for personal gain since long before he ran for president, beginning with the full-page ads he ran in 1989 calling for the death penalty for the Central Park Five, five young men of color who were wrongly convicted of assaulting a white jogger.

Trump — who rarely holds his tongue — has been silent in the face of a long list of high-profile killings by police of black men, including Eric Garner, who was placed in a chokehold and whose dying words, “I can’t breathe,” became a rallying cry for the Black Lives Matter movement. (Trump has instead invoked those words on several occasions to mock political rivals, even bringing his hands to his neck for dramatic effect.)

He spent years railing against NFL quarterback Colin Kaepernick and other players for kneeling during the National Anthem to protest racial injustice and police brutality. And in one speech he appeared to advocate rougher treatment of people in custody, speaking dismissively of the police practice of shielding the heads of handcuffed suspects as they are being placed in patrol cars.

At the same time, Trump and his campaign have tried to make inroads with black Americans, particularly after Biden suggested last week that black voters who support Trump “ain’t black.” A bedrock of the Democratic base, black Americans are unlikely to embrace Trump en masse, but his campaign believes even a marginal shift could make a difference — and send a message to white voters uneasy about the president’s charged rhetoric.

Meanwhile, the unrest complicates the Trump campaign’s plans for Minnesota, one of the key swing states he hopes to win in November.

Twitter’s decision to flag Trump’s tweet — the second time it has acted this week — came a day after he signed an executive order challenging the social media giant’s protections against lawsuits as he accuses it of stifling conservative voices. The warning label prevented the tweet from being shared or liked, though it could still be viewed by users. The White House, trying to skirt the blockage, reposted the message on its own official Twitter account Friday morning. Twitter quickly flagged that tweet, too, accusing the White House of promoting violence.

Supporters of the president balked at the move.

Trump campaign manager Brad Parscale accused the media, Biden and other Democrats of “purposefully misrepresenting what the President had said, and showing once again that they are incapable of resisting their base impulse of dividing Americans, solely for the purpose of political gain, ratings, and cable news profit.”