US and Chinese negotiators are working to find an agreement to address Trump's complaints about years of unfair treatment by China. 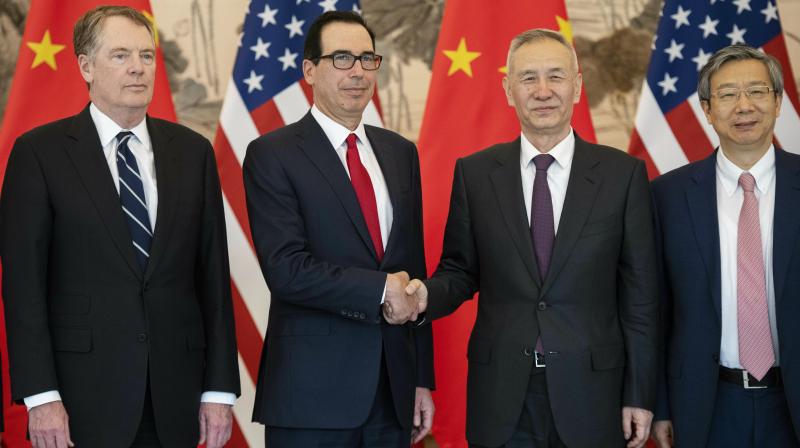 Trump and Chinese leader Xi Jinping agreed to a truce in December to refrain from further escalation. (Photo:AP)

Washington: The United States said on Friday that its trade negotiators are making "great headway" with Beijing in talks aimed at ending a bruising tariffs battle between the two economic superpowers.

US and Chinese negotiators are working to find a binding agreement to address President Donald Trump's complaints about years of unfair treatment of US companies by China, which would allow a rollback of the tariffs hitting businesses in both countries.

"We are still making great headway, including these talks," White House economic advisor Larry Kudlow said on CNBC, as Treasury Secretary Steven Mnuchin and US Trade Representative Robert Lighthizer headed home from the latest round of negotiations in Beijing.

"The last message we got is they made more headway," Kudlow said.

The White House also reported "progress" in what it termed "candid and constructive discussions," saying the trade talks would resume in the US capital on April 3.

Mnuchin wrote on Twitter that he and Lighthizer "concluded constructive trade talks in Beijing," but did not provide more details.

"I look forward to welcoming China's Vice Premier Liu He to continue these important discussions in Washington next week," he said.

The two negotiating teams, including China's central bank chief Yi Gang, posed for pictures in front of Chinese and American flags at the conclusion of the latest round of talks, but they did not make statements to the media.

Officials are seeking to iron out major differences over US accusations that China has been using unfair trade practices for years by heavily subsidizing its companies while snatching the technological know-how of American firms.

Trump has said the two sides were close to a deal, repeatedly saying the talks are going "very well," but officials have played down expectations of an imminent agreement.

On Thursday, Kudlow said the talks were not "time-dependent" and could last weeks or even months if necessary.

The talks are "policy and enforcement dependent," Kudlow said.

The Chinese commerce ministry said a "large amount of work" remains to be done.

The two sides have imposed tariffs on USD 360 billion in two-way trade since last year but Trump and Chinese leader Xi Jinping agreed to a truce in December to refrain from further escalation.

Trump suggested last week that some of those tariffs should stay in place even after a deal is reached to ensure China keeps its end of any bargain.

"We have to see what the track record is and we're not going to give up our leverage," said Kudlow.

US insistence on keeping the first tranche of 25 percent tariffs on USD 50 billion worth of Chinese imports could be a sticking point for a deal, analysts say.

It is hard to predict if China will accept a deal leaving some tariffs in place, said economist Cui Fan of the University of International Business and Economics in Beijing.

The truce agreed by Xi and Trump called for "reaching a deal as soon as possible in the direction of mutually canceling the punitive tariffs slapped on by both sides," Cui said.

Beijing has taken steps to address some US complaints, rushing through a law this month that promises to protect foreign firms from the forced transfer of technology.

It also includes language on protecting foreign companies' commercial secrets, and fleshes out criminal penalties for officials who leak confidential information they obtain from overseas businesses.

Chinese state-owned companies also have stepped up purchases of American agricultural goods such as soybeans.

Massive purchases of American goods are expected to be part of any deal, in order to lower the politically sensitive US goods trade deficit with China, which reached a record high of USD 419.2 billion last year.