World   Americas  30 Mar 2019  Muellar report on Trump-Russia to be made public by April
World, Americas

Muellar report on Trump-Russia to be made public by April 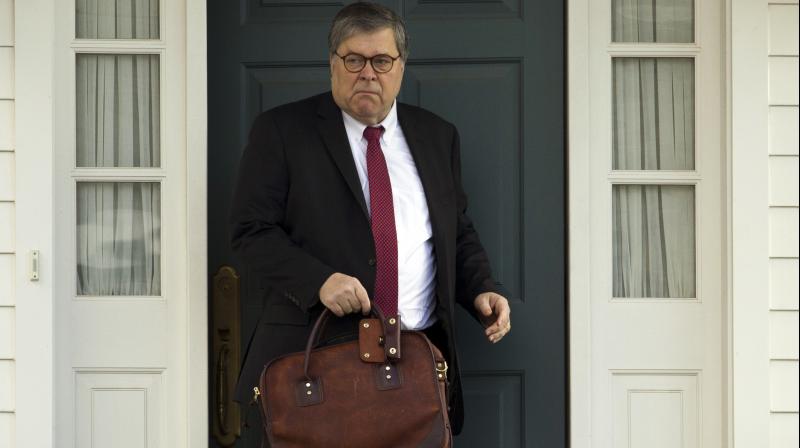 On March 22, Mueller completed his 22-month probe and Barr on Sunday sent a four-page letter to Congress that outlined the main findings. (Photo:AP)

Washington: US Attorney General William Barr plans to make public a redacted copy of Special Counsel Robert Mueller's nearly 400-page investigative report into Russian interference in the 2016 election by mid-April, "if not sooner," he said in a letter to lawmakers on Friday.

"Everyone will soon be able to read it on their own," Barr wrote in the letter to the top Democrats and Republicans on the Senate and House Judiciary committees.

He said he was willing to appear before both committees to testify about Mueller's report on May 1 and May 2.

On March 22, Mueller completed his 22-month probe and Barr on Sunday sent a four-page letter to Congress that outlined the main findings. Barr told lawmakers that the investigation did not establish that members of the election campaign of President Donald Trump conspired with Russia.

Speaking to reporters at his Mar-a-Lago resort in Palm Beach, Florida on Friday Trump said he had "great confidence" in Barr.

Asked whether he agreed with Barr's decision to release the Mueller report to the public, Trump said, "If that's what he'd like to do I have nothing to hide. This was a hoax. This was a witch hunt."

Leading congressional Democrats are pressing for a quick release of the entire Mueller report.

"We need to see the Mueller report ASAP, with only those redactions that are absolutely necessary to protect intelligence sources and methods. Congress and the American people need the full story about what happened in 2016," said Senator Mark Warner, the senior Democrat on the Senate Intelligence Committee.

A Mueller spokesman would not comment on the letter to Congress that Barr issued on Friday.

Mueller left unresolved the question of whether Trump obstructed justice during the investigation. Barr said that based on the evidence presented, he concluded it was not sufficient to charge the president with obstruction.

Barr said his letter on Sunday "was not, and did not purport to be an exhaustive recounting" of Mueller's investigation and said he believed the public should be allowed to read the report and judge for themselves.

Lawmakers have since been clamouring for more details.

In a statement on Friday, House Judiciary Committee Chairman Jerrold Nadler said the April 2 deadline he imposed on Barr's Justice Department "still stands" and he urged the release of a "full and complete" report without redactions.

The top Republican on the committee, Doug Collins, said on Twitter that Barr was "following his word" by pledging to release the report and chided Nadler for setting an arbitrary deadline.

Barr said in his letter on Friday that certain information must be redacted before the report is released, including secret grand jury information, intelligence sources and methods and information that by law cannot be public or might infringe on privacy.

Nadler rejected that notion, saying Barr must "work with us to request a court order to release any and all grand jury information to the House Judiciary Committee."

The federal rules of criminal procedure make it a crime for government officials to publicly divulge sensitive grand jury materials such as transcripts, unless a federal judge signs off first.

Barr said on Friday that although Trump also has the right to assert executive privilege on some materials in the report to keep them from being made public, Trump has said publicly he intends to defer to Barr.

Because of that, Barr added, there were no plans for the Justice Department to submit the report to the White House for a privilege review.

During his investigation, Mueller brought charges against 34 people, including Russian agents and former Trump aides.

The US intelligence community has concluded that Russia used a campaign of hacking and propaganda to sow discord in the United States, harm Clinton and boost Trump's candidacy. Russia denied election interference.