Judge blocks deportation of travellers and refugees from 7 Muslim nations stranded at US airports. 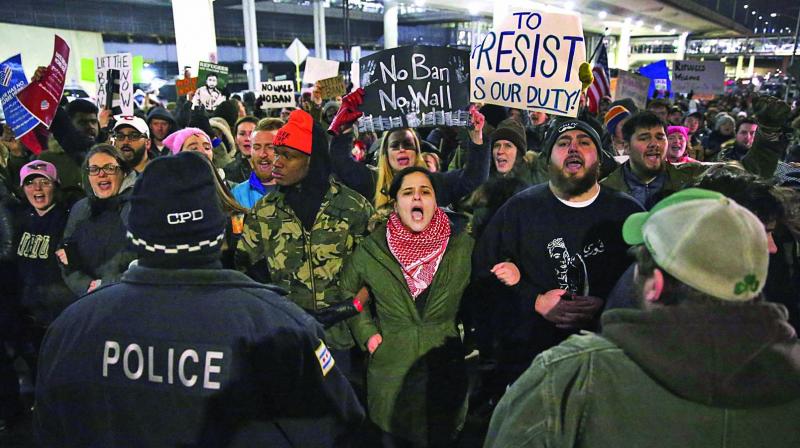 Protesters gather at the O’Hare International Airport after more than a dozen people were detained, including green card holders, in Chicago on Saturday. They were detained following President Donald Trump’s executive order that bans legal US residents and visa holders from seven Muslim-majority nations from entering the US for 90 days and puts an indefinite hold on a programme resettling Syrian refugees. (Photo: AP)

New York: A federal judge on Saturday blocked the deportation of travellers and refugees from seven Muslim nations stranded at US airports under an order from President Donald Trump, after a lawsuit filed on behalf of two Iraqis with ties to US security forces.

In the lawsuit filed in federal court in Brooklyn, New York, the two men challenged Mr Trump’s directive on constitutional grounds. The suit said their connections to US forces made them targets in their home country and that the pair had valid visas to enter the US.

The lawsuit highlights some of the legal obstacles facing Mr Trump’s new administration as it tries to carry out the directive, which the President signed late on Friday to impose a four-month ban on refugees entering the US and a 90-day hold on travelers from Syria, Iran and five other Muslim-majority countries.

US district judge Ann Donnelly ordered the authorities to refrain from deporting previously approved refugees as well as “approved holders of valid immigrant and non-immigrant visas and other individuals... legally authorised to enter the US” from the countries targeted in Mr Trump’s order.

The American Civil Liberties Union, which sought the temporary stay, said it would help about 100 to 200 people who found themselves detained in transit or at US airports.

“I am directing the government to stop removal if there is someone right now in danger of being removed,” Ms Donnelly said. “No one is to be removed in this class,”

Trump was unrepentant on Sunday defending his policy in the face of growing outrage across the globe and from Americans at home. “Our country needs strong borders and extreme vetting, NOW. Look what is happening all over Europe and, indeed, the world - a horrible mess!” he tweeted to his followers.