'We are speechless': Otherwise blank edit page of tragedy affected US paper

The front page headline of The Capital, covering own tragedy, was bereft of even an adjective with pictures above of the 5 people killed. 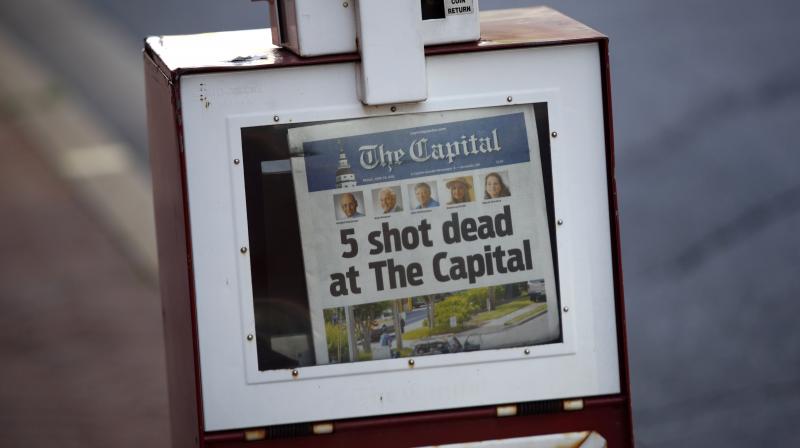 Inside, among the paper's blanket coverage of its own tragedy, were profiles of the five staffers gunned down in the latest spasm of America's epidemic of gun violence. (Photo: AP)

Washington: A local newspaper targetted in a shooting that left five dead managed to publish on Friday, covering its own tragedy and leaving its editorial page blank in honour of those slain.

"We are speechless," read a brief comment in the otherwise empty editorial page of The Capital, the print version of the digital newspaper the Capital Gazette.

It went on to name the victims, and then said: "tomorrow this page will turn to its steady purpose of offering our readers informed opinion about the world around them, that they might be better citizens."

The editorial page editor, Gerald Fischman, was among those killed.

The front page headline about the killing in the Maryland state capital, Annapolis, was bare-bones -- bereft of even an adjective.

"Five shot dead at The Capital," it read, below pictures of the five people killed -- four journalists and a sales assistant. Two other people were wounded.

Read: Upset with newspaper, US gunman kills 5 in newsroom shooting

Staff who survived the shooting -- by a man described as having a long-running grudge against the paper -- worked outside Thursday after the massacre, in a car park or even from the back of a pickup truck.

"I don't know what else to do except this," reporter Chase Cook said Thursday.

"We're putting out a paper tomorrow."

Also Read: 'We're putting out a paper tomorrow': US reporter after shooting at office

Inside, among the paper's blanket coverage of its own tragedy, were profiles of the five staffers gunned down in the latest spasm of America's epidemic of gun violence.