Some two million Cubans live in the United States, nearly 70 percent of them in Florida. 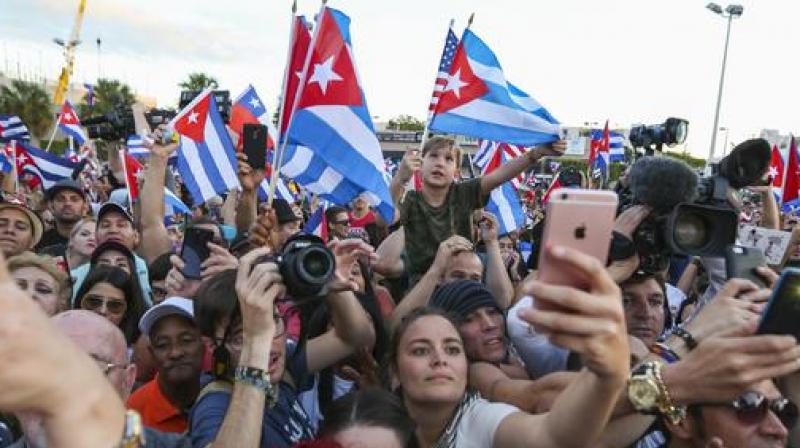 Crowds first spilled into the streets of Little Havana Friday night as news of the 90-year-old revolutionary leader's death in Cuba spread.

The revelry has not stopped since.

"I'm not tired of celebrating because I can't believe it. I never thought that this moment would arrive," said a woman named Delsy who declined to give her last name. She celebrated with a large crowd outside the Cafe Versailles, where exiles met in the Cold War's heyday to plot the overthrow of the Castro regime.

Some two million Cubans live in the United States, nearly 70 percent of them in Florida. The vast majority of those live in Miami and many saw Castro as a brutal tyrant.

Streets that had been closed because of the festive crowd reopened Sunday as authorities tried to restore a semblance of normality. But then they had to close them down again.

Among the cacophony of car horns, drums, loud music and singing, a chant rang out: "Fidel, you tyrant, take your brother too!"

Fidel Castro may be gone, but his younger brother Raul, 85, remains in power as president of the Americas' only one-party Communist-run state.

A rally demanding freedom and democratic reforms in Cuba has been convened for Wednesday in Little Havana.

It will coincide with the start of a four-day procession in which Castro's remains will be taken around the island of 11 million for people to pay their respects.

"The tyrant is dead but the tyranny continues," said activist Orlando Gutierrez of the Cuban Resistance Assembly.

The place was bursting with people Saturday night. The street outside, full of Cuban restaurants and bars, was packed with late-night pedestrians and customers.

At a nearby corner, Cuban retirees sat outside, enjoying the warm and humid night as they discussed the island's future.

"Now we Cubans have hope that without Fidel, communism will fall, and if God allows it, we can return to our free country," said Vicente Abrez, 65.

However, Leticia Gallo, a 44-year-old therapist who arrived in Miami from Cuba seven years ago with a young son, doesn't believe Castro's death will immediately change much.

Still, "it's light at the end of the tunnel," she said.

A small group of women from the Ladies in White movement -- founded by the wives and other female family members of former Cuban political prisoners -- marched on Sunday on a street named for them in Miami.

An especially large crowd gathered for mass at the Shrine of Our Lady of Charity, the patron saint of Cuba, where Miami Archbishop Thomas Wenski led the Saturday service.

"Fidel Castro has died. Now he awaits the judgment of God, who is merciful but also just," Wenski said, urging the faithful to pray "for peace for Cuba and its people."

The Mass was solemn and the scene far from celebratory. Some women wiped away tears.

Castro "separated our people and made us hate each other," the Cuban-born jazzman Sandoval said.

Politicians also lined up to mark the occasion.

Cuban-American Miami Mayor Tomas Regalado visited revelers Saturday afternoon, telling reporters that they "should not be criticized for celebrating"someone's death. "Understand what it means" to them, he said.

Florida Governor Rick Scott said he was joining Cuban-Americans across the country "who are incredibly hopeful for the future of Cuba."

"After decades of oppression, the Cuban people deserve freedom, peace and democracy," the Republican added in a statement.

He said Sunday on CNN that it was "pathetic" that Obama, in a statement on Castro, had not mentioned the "thousands upon thousands of people who suffered brutally under the (Castro) regime" or who died trying to escape it.