The meeting comes a week after the Democratic Party member apologised for not able to attend “Howdy, Modi” event. 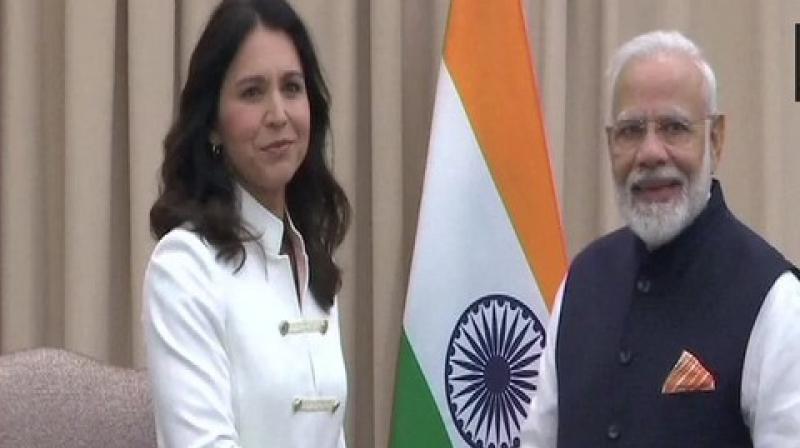 Gabbard had added that India was one of America's closest allies in Asia and is a country of growing importance in a critical region of the world. (Photo: ANI)

New York: Tulsi Gabbard, the first Hindu elected to the US Congress, met Prime Minister Narendra Modi in New York in an unscheduled meeting on the sidelines of the United Nations General Assembly on Friday.

The meeting comes a week after the Democratic Party member apologised for not able to attend “Howdy, Modi” event, where Modi backed US president Donald Trump for a second term.

Recently, Gabbard  hit back at critics who accused the Democratic candidate of being a "Hindu nationalist", saying questioning her commitment to America while not probing non-Hindu leaders creates a "double standard" that can only be rooted in "religious bigotry".

After the meeting with the Indian Prime Minister, Gabbard said: “My meetings with Prime Minister Narendra Modi, India's democratically elected leader, have been highlighted as 'proof' of this and portrayed as somehow being out of the ordinary or somehow suspect, even though President (Barack) Obama, Secretary (Hillary) Clinton, President (Donald) Trump and many of my colleagues in Congress have met with and worked with him."

On January 11, she announced that she would be running for the White House in 2020.