The counter-demonstrators surrounded their outnumbered rivals, chanting: 'No Trump, no KKK, no fascist USA' and 'Go home Nazi'. 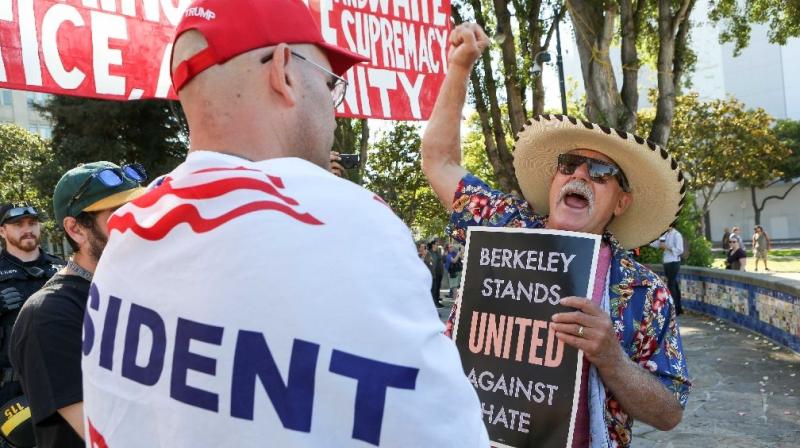 A number of demonstrators with their faces covered were escorted out of the park by police, who reported 14 arrests, mostly for violating a ban on masks, sticks and other potential weapons. (Photo: AFP)

Los Angeles: Thousands of counter protesters clashed with supporters of President Donald Trump in California on Sunday, leading to more than a dozen arrests, police and witnesses said.

A peaceful protest in Berkeley, outside San Francisco, began turning violent around noon (1900 GMT) as fights broke out with the opposing sides facing off in Martin Luther King Jr Civic Center Park, which was closed to the public.

Hundreds of black-clad leftist "antifa" activists jumped police barricades to confront the small number of Trump supporters who had showed up, despite their "No to Marxism in America" rally having been canceled over fears of violence.

The counter-demonstrators surrounded their outnumbered rivals, chanting: "No Trump, no KKK, no fascist USA" and "Go home Nazi."

A number of demonstrators with their faces covered were escorted out of the park by police, who reported 14 arrests, mostly for violating a ban on masks, sticks and other potential weapons.

Police in riot gear fired a rubber bullet at a demonstrator who attempted to cross a barricade into the park, according to the Los Angeles Times, while protesters set off smoke bombs. Joey Gibson, leader of the right-wing Patriot Prayer group, was pepper sprayed by leftist counter-protesters, an AFP photographer saw.

Mother Jones reporter Shane Bauer tweeted that he had been pepper sprayed and posted a video he said showed anti-fascist protesters stomping on and beating an "alt-right" supporter as he lay in the road. It was one of a number of videos posted on social media purportedly showing black-clad antifa activists physically attacking both pro-Trump demonstrators and journalists. City officials had denied at least three requests for permits from demonstrations on both sides at the park, they said.

Amber Cummings, a Trump supporter, had organized the "No To Marxism in America" rally but later asked supporters not to show up out of fears of violence.

Police said a crowd which had reached 4,000 at its peak had largely dispersed by 3:30 pm. The clashes followed racially charged violence earlier this month in Charlottesville, Virginia at a demonstration called by neo-Nazis and white supremacists.

That rally saw a woman killed after an avowed white supremacist rammed his car into a group of anti-racism counter-protesters.