On Friday, Mr Trump said he would leave it to Kelly to settle the security clearance dispute with Kushner. 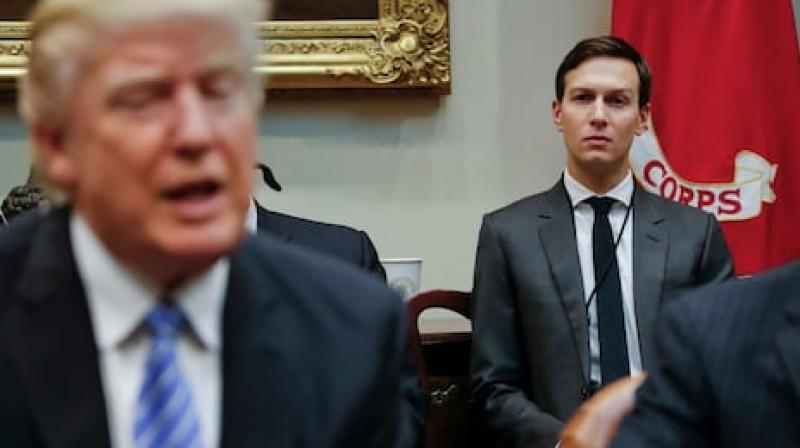 Mr Kushner, a wealthy New York businessman married to Trump's daughter Ivanka, has not received his full security clearance because of his extensive financial links, which have taken a long time to examine. (Photo: AP)

Washington: US President Donald Trump's son-in-law and close adviser, Jared Kushner, has lost access to the most valued US intelligence report, the President's Daily Brief, as the White House imposes greater discipline on access to secrets, two US officials familiar with the matter said on Tuesday.

Mr Kushner, who has been operating under an interim security clearance for about a year, had his access to the highly classified briefing cut off in the past few weeks, said the sources.

A third official, also speaking on condition of anonymity, said Deputy Attorney General Rod Rosenstein recently passed new information to White House Counsel Don McGahn that led to the slowing or stopping of Kushner's pending clearance application. The nature of that information was not clear.

It also is unclear if and when Mr Kushner's access to the briefing, known as the PDB, which requires clearance higher than the Top Secret level, would be reinstated.

Mr Kushner, a wealthy New York businessman married to Trump's daughter Ivanka, has not received his full security clearance because of his extensive financial links, which have taken a long time to examine. He has revised his security clearance form, called an SF-86, several times.

A White House spokesman for Mr Kushner did not immediately return a phone call and email seeking comment. Trump ignored reporters' shouted questions about Mr Kushner and his clearance at an event on Tuesday afternoon.

Mr Kushner's attorney, Abbe Lowell, said in a statement: "Mr Kushner has done more than what is expected of him in this process."

"My inquiries ... have confirmed that there are a dozen or more people at Mr Kushner's level whose process is delayed, that it is not uncommon for this process to take this long in a new administration, that the current backlogs are being addressed, and no concerns were raised about Mr Kushner's application," Lowell said.

Mr Trump's White House has been grappling with the security clearance issue since it emerged in February that staff secretary Rob Porter worked for Trump for a year with a temporary clearance despite accusations by his two former wives of domestic abuse. Porter has maintained his innocence.

The President's Daily Brief is distributed to a small number of top-level US officials. It includes highly classified intelligence analysis, information about CIA covert operations and reports from the most sensitive US sources or those shared by allied intelligence agencies.

New security clearance policies announced by White House Chief of Staff John Kelly "will not affect Mr Kushner's ability to continue to do the very important work he has been assigned by the President," Lowell said.

But one of the US officials who said Kushner had lost access to the daily brief said that without it, his role in some major policy deliberations, including on China and Russia, could be limited.

Mr Kushner has had a broad portfolio in the White House. He has taken the lead on Mr Trump's plan to forge a Middle East peace deal and led the Office of American Innovation, which is intended to modernize and downsize government programs.

Mr Kelly, whose handling of the Porter case was heavily criticized, decreed on February16 that any interim security clearances for staffers whose background investigations had been pending since June 1 or before would be discontinued within a week.

A source familiar with the matter said the situation had caused tensions between Kushner and Kelly.

On Friday, Mr Trump said he would leave it to Kelly to settle the security clearance dispute with Kushner, but left little doubt he wanted the case settled in a way that allowed Kushner to keep his job. As president, Trump could grant Kushner a full security clearance on his own authority.

White House spokesman Sarah Sanders would not comment on whether Kushner's security clearance issues had been resolved.

"He's a valued member of the team and he will continue to do the important work that he's been doing since he started in the administration," she told a briefing.

A top Republican and Democrat on the Senate Judiciary Committee wrote to McGahn and FBI Director Christopher Wray on Tuesday, asking for more information on the number of White House officials with interim clearances.

Citing reports that dozens of officials are operating with interim clearances, the two lawmakers wrote: "If true, this raises significant concerns that ineligible individuals, who hold positions of public trust, may have access to sensitive or classified information."