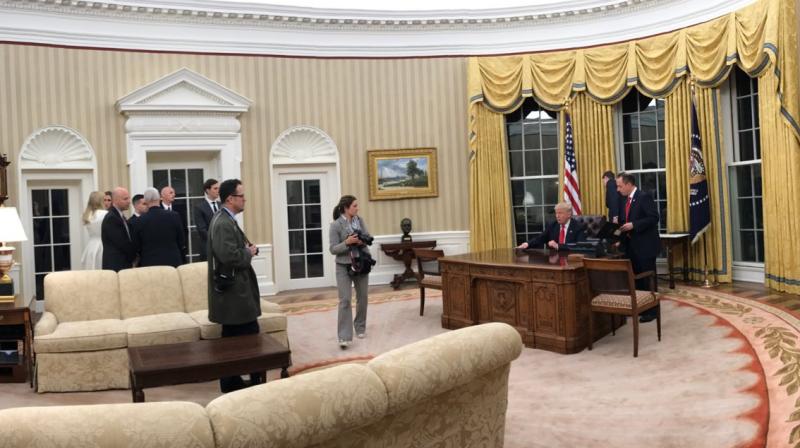 Washington: US President Donald Trump has given a makeover to the Oval Office in accordance with his love of gilded decor, replacing the red curtains used during President Barack Obama's second term with a set of gold curtains and has introduced some other notable changes.

Anyone who's ever caught a glimpse of Trump's three-story penthouse in New York's Trump Tower knows the 45th president of the US likes the look of royalty, a CBS News report said.

His Versailles in the Sky, as it has come to be known, is accented with marble, the Trump family "coat of arms," and paintings of Greek gods. There is also loads of gold, it said.

The red curtains - while used briefly by President George W Bush - ironically first hung in the Oval Office during Bill Clinton's presidency. President Bush ultimately swapped them out for a slightly different set of golden drapes.

Another notable change was the Oval Office rug: A red-and-beige carpet with green leaves around its outer edge, which was used briefly by Bush but originated in the Reagan era.

Obama had in August 2010 had toned down the vibe of the Oval Office with a new tan-and-navy rug with inspirational quotes from five American heroes around its outer edge.

Trump, however, has retained the famous Resolute Desk, an 1880 gift from Queen Victoria and first used by John F Kennedy. It is now being used by its Seventh President.

Opulent and highly ornamented, its wood was salvaged from a British ship called the HMS Resolute, which explored the Arctic in the mid-1800s.

Trump has also reinstalled a bust of former British Prime Minister Winston Churchill in the Oval Office. The bust was removed to outside the Treaty Room in the private residence of the White House in 2009 under his predecessor Obama.

Additionally, a bust of Teddy Roosevelt is in one of the bookshelves. Some of the artwork have also been swapped.

According to a CNN report, some paintings have also been replaced by Trump, including two by the door by Edward Hopper.

Trump has held onto "The Avenue in the Rain," by the American impressionist Childe Hassam, from Obama's Oval Office, and the back wall still hangs a painting of George Washington above the fireplace.

The Swedish Ivy on the mantlepiece is also retained, the news channel said.