While cooking, they discussed their shared South Indian roots and their families' immigration stories. 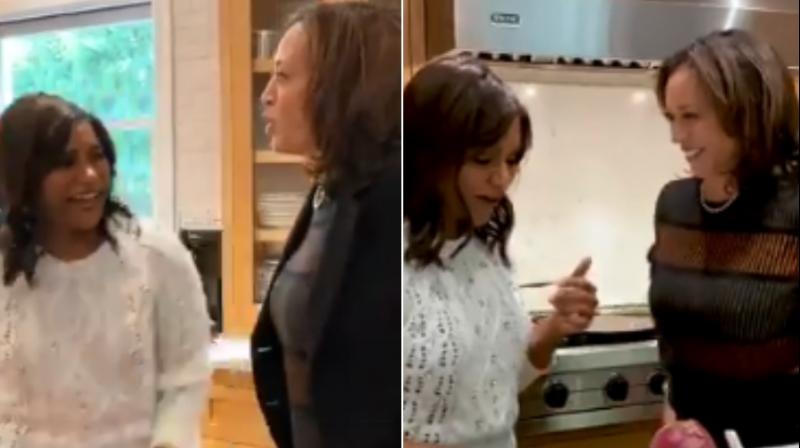 Vera Mindy Chokalingam or Mindy Kaling has been a longtime supporter of Harris, who is of mixed Indian and American heritage. Harris' mother was from Chennai. (Photo: Screengrab)

The video of their joint Dosa cooking adventure has gone viral ever since it was released on social media a day earlier and has hit more than half a million views on Twitter alone. While cooking, they discussed their shared South Indian roots and their families' immigration stories.

Vera Mindy Chokalingam or Mindy Kaling has been a longtime supporter of Harris, who is of mixed Indian and American heritage. Harris' mother was from Chennai.

I really believe in her, I think she's a really exciting candidate, and I like her stances on so many issues that are important to me, Kaling told the CNN early this summer.

Who else keeps their spices in Taster's Choice jars? Turns out Mindy Kaling and I have more in common than we initially thought, Harris said after the video was released.

The video was titled Mindy and Kamala make masala dosa.

The less-than-nine-minute video, in which Harris acknowledges that she never made dosas, has received wide acclaims from eminent Indian Americans.

Loved all of this, said Vanita Gupta, president and CEO of the Leadership Conference on Civil and Human Rights.

Dear 12-Year-Old Me, One day, one of the funniest people on TV will cook a meal with a progressive US Senator who happens to be running for President and they'll both be strong Indian American women. Your Future Self, said Kal Penn, former Obama Administration official and actor.

In which two South Indian American women - one @mindykaling a TV celebrity, the other @KamalaHarris a candidate for President - make dosa & eat with their hands & the whole world loves it & I feel all the #DesiPride, tweeted Gautam Raghavan, chief of staff to Indian-American Congresswoman Pramila Jayapal.

My mom also keeps her spices in Taster's Choice jars. And when I go home this week I will also be eating masala dosa. And I will also be eating with my right hand only. This video is hugely significant for a lot of reasons. Truly. But @mindykaling, where is the sambar/chutney?! asked Deepa Shivaram from NBC news.

Check it out below:

I had so much fun cooking masala dosa with @mindykaling, and even got to meet her dad.pic.twitter.com/9dgQUjKeZF