Modi's visit to the WH 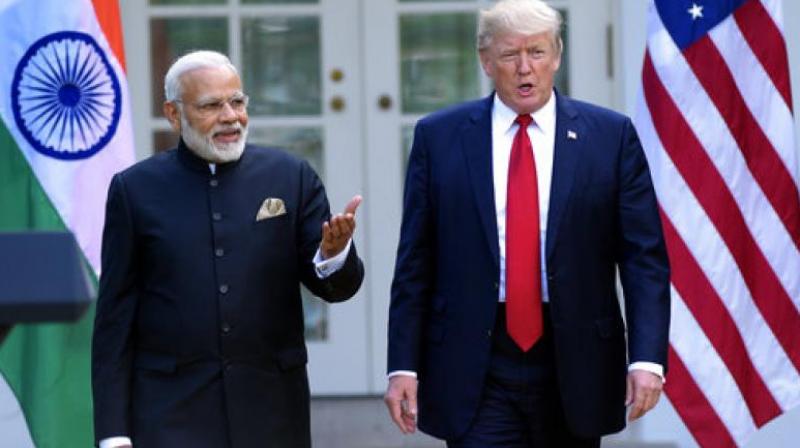 The official said that there was also a great meeting of the minds between Prime Minister Modi and President Trump on the terrorism issue. (Photo: File)

Washington: The meeting between Prime Minister Narendra Modi and President Donald Trump in June laid a strong foundation for moving India-US relationship forward, a senior US official has said, indicating that the defence and counter-terrorism are likely to be key areas of co-operation.

"I think the main issues that were discussed and will be followed up include security in the Indo-Pacific region and working closely with India to maintain free and open seaways, freedom of commerce, adherence to international law and sovereignty issues," the official said on condition of anonymity, giving a brief review of the India-US relationship in the first eight months of the Trump administration.

This very much came across in the joint statement with the references to the common principles for the Indian Ocean region, the official said, adding that the two countries will be working to follow up those commitments.

Defense cooperation was a big part of the visit, said the official, mentioning the estimated USD 2 billion deal for sale of guardian drones to India by the US.

This is "the first time" that the US has decided to provide such technology to a non-NATO ally.

"This was a big step in the administration to agree to do that. Now there are follow up discussions in terms of the conditions of the sale and (other) specifics. As you know, these kinds of defence deals take time to completely move through the bureaucracy and come to the final agreements. Thats ongoing," the official said.

The official said that there was also a great meeting of the minds between Prime Minister Modi and President Trump on the terrorism issue.

This also came through in the joint statement, in terms of stepping up our cooperation with India when it comes to consulting on terrorist designations, sharing information, intelligence on terrorist groups, and working together more closely in Afghanistan, the official added.

"Of course, the economic and trade issues, those were a little bit more contentious. We have a lot of work to do to address each market access issues that are there. Each side has particular concerns about market access," the official said, adding that the Trump administration will be following these up through the trade policy forum meeting thats coming up here shortly.

"I think it was a great visit. Theres still some positive reverberations from that visit. Not only did you see a personal rapport established between the President and Prime Minister, that frankly, they were able to build on even more in the Presidents phone call to the Prime Minister on the eve of Indian Independence Day. But, also, a strong foundation for moving the overall relationship forward," the official said.

"All of the US government agencies, practically all, are invested in this relationship with India. We are moving forward on all cylinders, in terms of the collaboration and cooperation. We could talk about Homeland Security and the movement there, but there are so many facets of the relationship, and I think this visit did what was necessary to provide that foundation, which now we can build on," the official asserted in response to a question.

In the defense arena, the official said, naval co- operation is a key priority area.

"Our Navy-to-Navy cooperation probably is the strongest of all the service to service cooperation between our governments. In terms of equipment sales, I think, F-18 is in the negotiating process.

This would be for the Navy. Hopefully, that will move forward. It is something that the Indian Navy is looking for US eager to help fulfill that requirement of the Indian Navy. Were very much focused on that particular deal," the official said.

At the same time, the official said, there is increasing exercises and cooperation, whether it be on humanitarian disaster relief operations, and anti-piracy.

"Then theres the sort of diplomatic efforts looking at extending the cooperation with other nations in the region, Sri Lanka, Bangladesh, and others. Thats very important, and of course, theres an important conference happening in Sri Lanka hosted by the India Foundation on the Indian Ocean region. There will be high level US participation in that. All of these efforts are extremely important in terms of our naval engagement," the official said.

On Saturday, the State Department announced that Acting Assistant Secretary of State for South and Central Asian Affairs and Acting Special Representative for Afghanistan and Pakistan Alice Wells will travel to Dhaka, Islamabad, and Colombo from August 28 to September 2.

She will meet with government officials, business leaders, and civil society representatives to discuss our cooperation in the region, a media statement said.