Trump said that he was looking forward to working with Modi to create and increase jobs in both the countries. 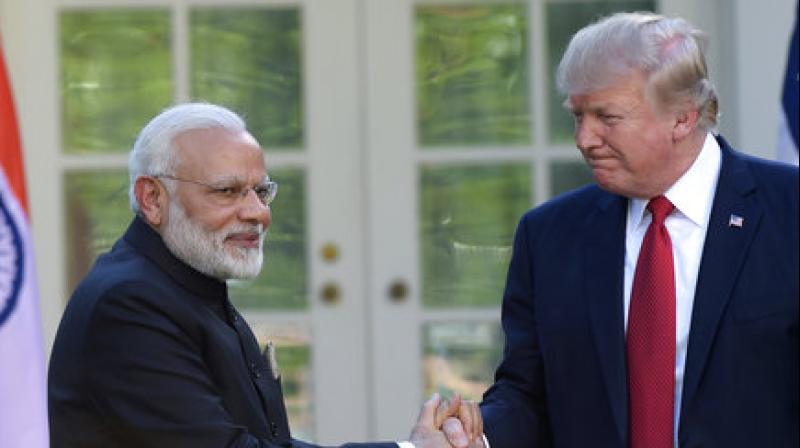 President Donald Trump thanks the audience at the end of joint statements with Indian Prime Minister Narendra Modi in the Rose Garden of the White House in Washington. (Photo: AP)

Washington: President Donald Trump hosted Prime Minister Narendra Modi at the White House for a series of meetings. He addressed a joint statement thanking Modi for paying a visit to the United States and spoke about the amicable relations between US and India, GST tax reform, job creation and more.

Following is the full statement:

Thank you very much. Prime Minister Modi, thank you for being here with us today.  It's a great honour to welcome the leader of the world's largest democracy to the White House.

I have always had a deep admiration for your country and for its people, and a profound appreciation for your rich culture, heritage and traditions. This summer, India will celebrate the 70th anniversary of its independence, and on behalf of the United States, I want to congratulate the Indian people on this magnificent milestone in the life of your very, very incredible nation.

During my campaign, I pledged that if elected, India would have a true friend in the White House. And that is now exactly what you have -- a true friend.  The friendship between the United States and India is built on shared values, including our shared commitment to democracy. Not many people know it, but both American and the Indian constitutions begin with the same three very beautiful words:  We the people.

The Prime Minister and I both understand the crucial importance of those words, which helps to form the foundation of cooperation between our two countries.  Relations between countries are strongest when they are devoted to the interests of the people we serve. And after our meetings today, I will say that the relationship between India and the United States has never been stronger, has never been better.

I'm proud to announce to the media, to the American people, and to the Indian people, that Prime Minister Modi and I are world leaders in social media -- (laughter) -- we're believers -- giving the citizens of our countries the opportunity to hear directly from their elected officials, and for us to hear directly from them. I guess it's worked very well in both cases.

I am thrilled to salute you, Prime Minister Modi, and the Indian people for all that you are accomplishing together. Your accomplishments have been vast. India has the fastest growing economy in the world. We hope we're going to be catching you very soon in terms of percentage increase, I have to tell you that.  We're working on it.

In just two weeks, you will begin to implement the largest tax overhaul in your country's history -- we're doing that also, by the way -- creating great new opportunities for your citizens. You have a big vision for improving infrastructure, and you are fighting government corruption, which is always a grave threat to democracy.

Together, our countries can help chart an optimistic path into the future, one that unleashes the power of new technology, new infrastructure, and the enthusiasm and excitement of very hardworking and very dynamic people.

I look forward to working with you, Mr. Prime Minister, to create jobs in our countries, to grow our economies, and to create a trading relationship that is fair and reciprocal. It is important that barriers be removed to the export of US goods into your markets, and that we reduce our trade deficit with your country.

I was pleased to learn about an Indian Airlines recent order of 100 new American planes, one of the largest orders of its kind, which will support thousands and thousands of American jobs. We're also looking forward to exporting more American energy to India as your economy grows, including major long-term contracts to purchase American natural gas, which are right now being negotiated, and we will sign them. Trying to get the price up a little bit.

To further our economic partnership, I'm excited to report that the Prime Minister has invited my daughter, Ivanka, to lead the US delegation to the Global Entrepreneurship Summit in India this fall. And I believe she has accepted.

Finally, the security partnership between the United States and India is incredibly important. Both our nations have been struck by the evils of terrorism, and we are both determined to destroy terrorist organizations and the radical ideology that drives them. We will destroy radical Islamic terrorism. Our militaries are working every day to enhance cooperation between our military forces. And next month, they will join together with the Japanese navy to take place in the largest maritime exercise ever conducted in the vast Indian Ocean.

Working together, I truly believe our two countries can set an example for many other nations, make great strides in defeating common threats, and make great progress in unleashing amazing prosperity and growth.

Prime Minister Modi, thank you again for joining me today, and for visiting our country and our wonderful White House and Oval Office. I enjoyed our very productive conversation this afternoon, and look forward to its continuation tonight at dinner. The future of our partnership has never looked brighter. India and the United States will always be tied together in friendship and respect.