No discussion on H-1B during Modi-Trump meeting 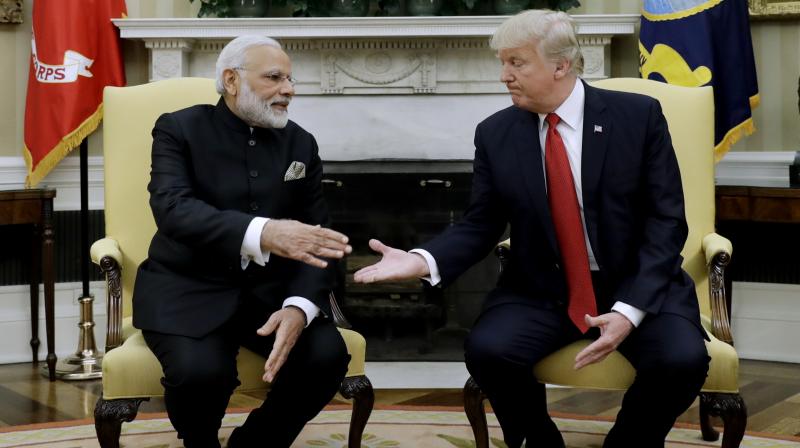 US President Donald Trump reaches to shake hands with with Indian Prime Minister Narendra Modi during their meeting in the Oval Office of the White House in Washington. (Photo: AP)

Washington: The H-1B visa issue that was looming on the Indo-US relationship in the run up to Prime Minister Narendra Modi's maiden meeting with President Donald Trump did not figure in the talks between the two leaders.

With the Trump administration undertaking a review of the H-1B visa, the most sought-after by Indian IT professionals, the issue had taken centrestage ahead of Modi's US visit withthe issue expected to figure prominently in bilateral discussions.

However, the H-1B issue specifically did not figure in the talks with Foreign Secretary S Jaishankar telling reporters that there was a lot of discussion with business leaders and the two leaders about the digital partnership when asked about whether H-1B visa issue figured in the talks.

"There is recognition that the Indian-American community has played an extraordinary role in building this relationship. When you value something it is obvious that you will take care of what you value," Jaishankar said.

There was also no mention of the H-1B visa issue in the Indo-US joint statement issued after the two leaders met.

The White House, in a fact sheet, said Indian-Americans have embraced innovation and entrepreneurship, sitting at the forefront of Silicon Valley's technology revolution, and founding an estimated 15 per cent of Silicon Valley startups.

"They have helped to develop the Pentium chip, fiber optics, and noise cancelling headphones, among numerous other innovations," it said.

Today, nearly four million Indian-Americans reside in the United States and over 700,000 US citizens live in India.

"However, there have been no immediate changes to visa application or issuance procedures, so we're not in a position to kind of prejudge what the outcome of the review might be.

So there's really been no changes as such at this point, and no specific changes that target any specific country or sector as of yet," the official had said.

There have been growing concerns in India over the crackdown on H-1B visas.

Trump signed an executive order in April for tightening the rules of the H-1B visa programme to stop "visa abuses".

Trump said his administration is going to enforce 'Hire American' rules that are designed to protect jobs and wages of workers in the US.