Joe Biden shruggs off Trump's remarks about his interactions with women 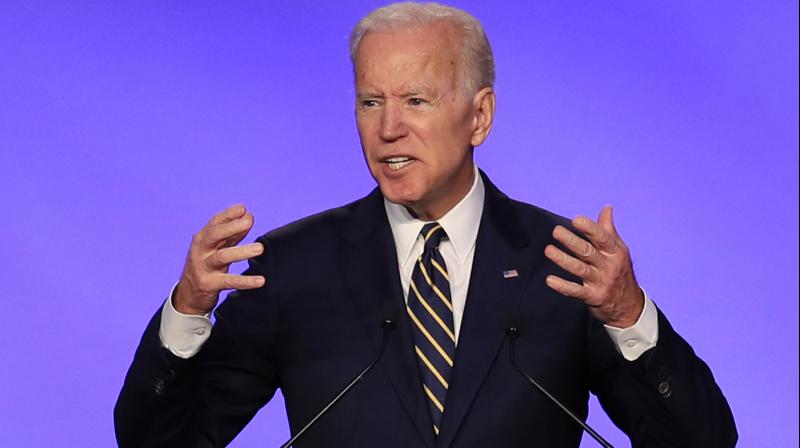 Multiple women have accused Biden this year of touching them inappropriately in the past. (Photo:AP)

Washington: Democratic 2020 frontrunner Joe Biden faced awkward questions Friday over his treatment of women in an emotional first television appearance of his US presidential campaign that saw him shed tears over his son's death.

The former vice president, 76, also traded jabs with Donald Trump over their age and vigor, after the president proclaimed himself a vibrant leader who was being made to "look very young" by Biden, who is four years older.

Biden launched his presidential campaign Thursday, rounding out a crowded field of 20 Democratic candidates, but the rollout appears to have been subdued by the focus on his age and interactions with women.

Aside from pushing back against Trump -- "if he looks young and vibrant compared to me, I should probably go home," Biden said -- he spent the first half of an hour-long appearance on ABC's "The View" on the defensive.

He was quizzed by the all-women panel about several of his past actions -- and stopped short of making outright apologies for them.

Multiple women have accused Biden this year of touching them inappropriately in the past, and while they have not said the elder statesman sexually harassed them, his tactile style and invasion of personal space has come under increasing scrutiny in the #MeToo era.

"I invaded your space. I'm sorry this happened," Biden said. "I'm not sorry in the sense that I think I did anything that was intentionally designed to do anything wrong or be inappropriate."

Biden was also pressed on his handling of an infamous 1991 Senate hearing that involved testimony by Anita Hill, who was aggressively questioned by an all-male committee about her claims of sexual harassment.

He said he recently called Hill to express regret over his handling of the hearings, but when asked by The View's hosts to apologize directly to her, he stopped short.

"I don't think I treated her badly," Biden said, adding that he believed her claims of harassment "from the beginning."

"There were a lot of mistakes made across the board. For that I apologize. We may have been able to conduct it better," he said of the hearings.

Biden is at the beginning of a third presidential bid, after failed efforts in 1988 and 2008.

He considered a White House run following eight years as Barack Obama's deputy, but declined after his son Beau died of cancer in 2015.

"He's not why I'm running," Biden said, as his eyes moistened with tears.