"I would never say anyone’s too old, but I know they’re all making me look very young, both in terms of age and energy." added Trump. 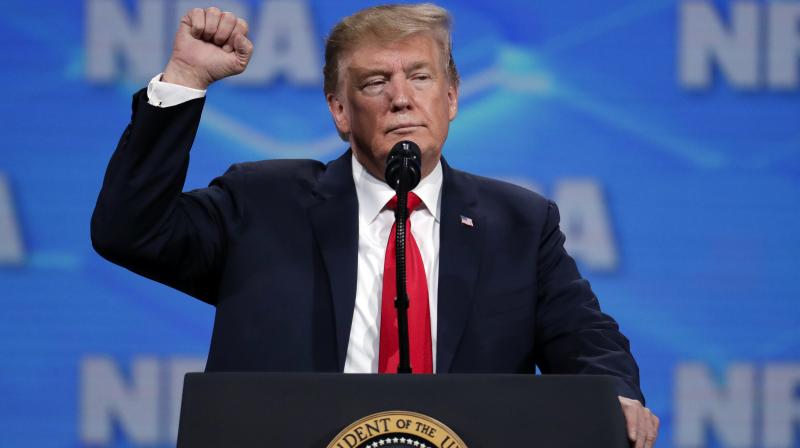 The remarks by the President came a day after the former Vice President announced his candidacy for the presidential nomination for 2020 elections. (Photo:AP)

Washington: United States President Donald Trump on Friday said at the age of 72 he feels like a "young, vibrant man" who can “easily” beat 76-year-old Joe Biden in the 2020 presidential elections.

Addressing the National Rifle Association in Indianapolis, The New York Post quoted the President as saying, “I just feel like a young man.  I'm so young. I can't believe it. ...,” in response to a question whether age is a factor in the 2020 race.

He said, “I am a young, vibrant man,” adding “I would never say anyone’s too old, but I know they’re all making me look very young, both in terms of age and I think in terms of energy”, apparently referring to Biden.

The remarks by the President came a day after the former Vice President announced his candidacy for the presidential nomination for 2020 elections through a campaign video on Twitter.

"I look at Joe? I don’t know about him. I don’t know,” The Washington Post quoted Trump as saying.

Earlier in the day, Biden, in an interview on ABC's "The View," mocked that if Trump "looks young and vibrant compared to me, I should probably go home."

“Look, everybody knows who Donald Trump is. The best way to judge me is to watch — see if I have the energy and the capacity. It’s just, you know, a show-me business,” Biden added.

Biden will be competing with 20 other candidates including heavyweights like Bernie Sanders and Elizabeth Warren to win Democratic nomination.

His announcement signalled that the core message for his campaign would be that Donald Trump's presidency "has left the country in a state of crisis".

This will be Biden's third attempt after two unsuccessful campaigns in 1998 and 2008. In 2008, he joined the Obama ticket as candidate for vice-president. He did not contest in 2016 after his son, Beau Biden, died of brain cancer, reported The Hill.

If he wins, he would be the oldest person to occupy the oval office - at 78 years of age.