The final vote count stood at 248 to 181, falling short of 290 votes or two-thirds majority that was required for legislation to be passed. 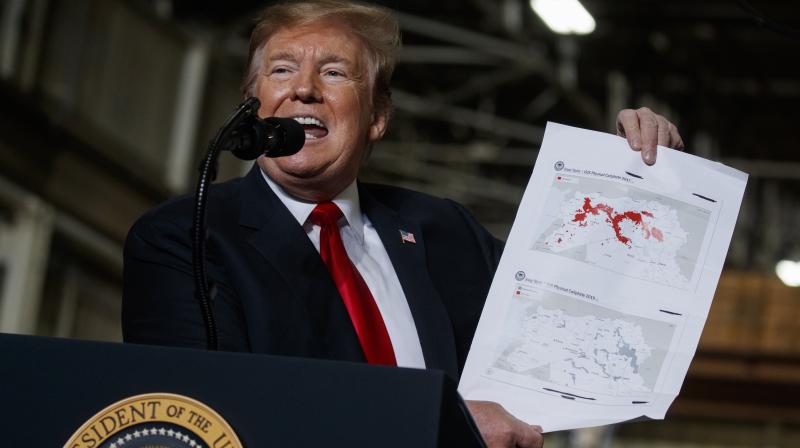 Trump vetoed the resolution of disapproval of his emergency declaration to get the wall funded and built along the US-Mexico border. (Photo: File)

Washington: The US House of Representatives on Tuesday (local time) failed to override the first veto issued by President Donald Trump on a resolution blocking his national emergency declaration that sought to fund the construction of a wall along the border with Mexico bypassing the Congress.

The final vote count stood at 248 to 181, falling short of the 290 votes or two-thirds majority that was required for the legislation to be passed. Notably, several Republicans backed the veto issued by Trump.

Slamming the "lawless" emergency declaration by Trump, House Speaker Nancy Pelosi and Democrat Senator from Texas Joaquin Castro outlined the future course of action the party would take after the vote, The Hill newspaper reported.

"The President’s lawless emergency declaration clearly violates the Congress’s exclusive power of the purse, and the Congress will work through the appropriations and defence authorisation processes to terminate this dangerous action and restore our constitutional system of balance of powers," a joint statement issued by Pelosi and Castro read.

“In six months, the Congress will have another opportunity to put a stop to this President’s wrongdoing. We will continue to review all options to protect our Constitution and our Democracy from the President’s assault,” it added.

Meanwhile, Trump hailed the "big win" and thanked his fellow Republicans for standing by his veto, while slamming the Democrats for not supporting his emergency declaration.

"Thank you to the House Republicans for sticking together and the BIG WIN today on the Border. Today’s vote simply reaffirms Congressional Democrats are the party of Open Borders, Drugs and Crime!" he wrote on Twitter.

The failure of the House to overturn Trump's veto comes a day after the Pentagon notified the US Congress that it authorised the transfer of USD 1 billion for building a barricade along the US-Mexico border.

On March 14, the Republican-controlled Senate voted to disapprove the emergency declaration by 59 votes to 41, in what was a sharp rebuke to Trump. The resolution was already passed in the Democrat-controlled House of Representatives by 245 votes to 182 last month, with 13 Republicans supporting the Democrats.

Minutes after the vote, Trump tweeted in capitals, "VETO!", an indication that he would reject the resolution.

Subsequently, the US President issued his first veto rejecting as "dangerous" and "reckless" congressional resolution of his emergency declaration and asserted that Americans would be "put at risk" at the border with Mexico if the measure became a law.

Trump vetoed the resolution of disapproval of his emergency declaration to get the wall funded and built along the US-Mexico border.

On February 15, Trump had declared a national emergency to bypass the Congress and fulfill his long-pending demand of building the wall.

Defending his move, the US President asserted that he had "no choice" but to use his emergency powers to stop illegal immigrants spreading crime and drugs.

Since then, several Democrats have chided Trump, asserting that his move was in violation of the US Constitution.