PM Modi like Elvis, can call him 'father of India', says Donald Trump

Trump on Tuesday compared Modi to Elvis Presley, the late American singer often referred to as the king of rock and roll. 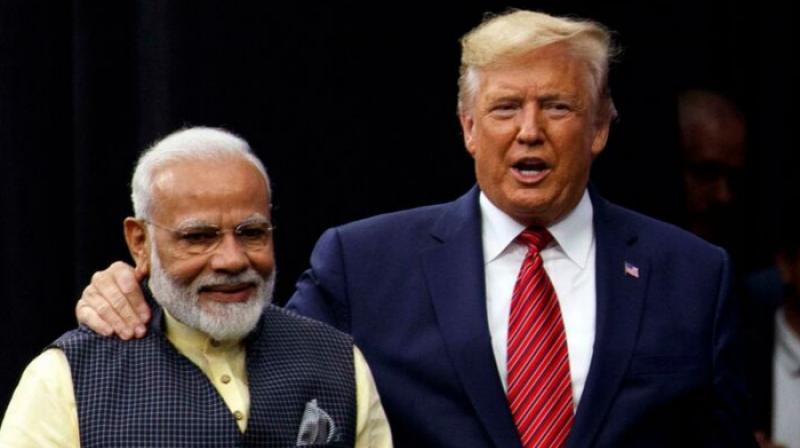 United Nations: Narendra Modi may be the prime minister of India. But to Donald Trump, Modi is "the King."

Trump on Tuesday compared Modi to Elvis Presley, the late American singer often referred to as the king of rock and roll, after the rock-star welcome Modi received on Sunday in Houston.

The president had carved out time to join Modi for a Texas-sized welcome from 50,000 cheering Indian Americans.

"Those people went crazy," Trump said as he and Modi met on the sidelines of the UN General Assembly, their second meeting in three days. "That was like Elvis. That was like, he's like an American version of Elvis."

Presley also drew throngs of cheering fans to his performances.

Asked to describe his personal chemistry with Modi, Trump said it's "as good as it can get."

"I have great respect, I have great admiration and I really like him, that's another thing," the president told reporters.

He went on to describe Modi as a "great gentleman" and "great leader" and suggested he be called the "father of India."

The prime minister, in turn, thanked Trump "from the bottom of my heart" for flying to Houston to join him at the "Howdy Modi!" rally.

Modi also highlighted a USD 2.5 billion agreement by Indian energy company Petronet that he said would produce USD 60 billion worth of investment and 50,000 jobs.

Houston-based Tellurian Inc., a liquefied natural gas company, announced the deal with Petronet over the weekend.

"President Trump is definitely my friend, but he is also a friend of India," the prime minister said.

On a more serious note, Trump said he expects the US and India will negotiate a trade agreement "very soon."

Trump also said it would be great if Modi and Pakistani Prime Minister Imran Khan can resolve their standoff over the disputed region of Kashmir.

"We all want to see that," said Trump, who met with Khan on Monday.

India and Pakistan each administers a portion of Kashmir. The conflict between them dates to the late 1940s when the countries won independence from Britain.

Two of their three wars have been fought over Kashmir.

The late 1980s brought the start of a full-blown armed rebellion against Indian control for a united Kashmir, either under Pakistan rule or independent. Since then, about 70,000 people have been killed in the conflict, which India sees as a proxy war by Pakistan.

Most Kashmiris resent the Indian troop presence and support the rebels.