This was the first time the prime minister met leaders of the Pacific Islands Developing States (PSIDS) in a plurilateral format, it added. 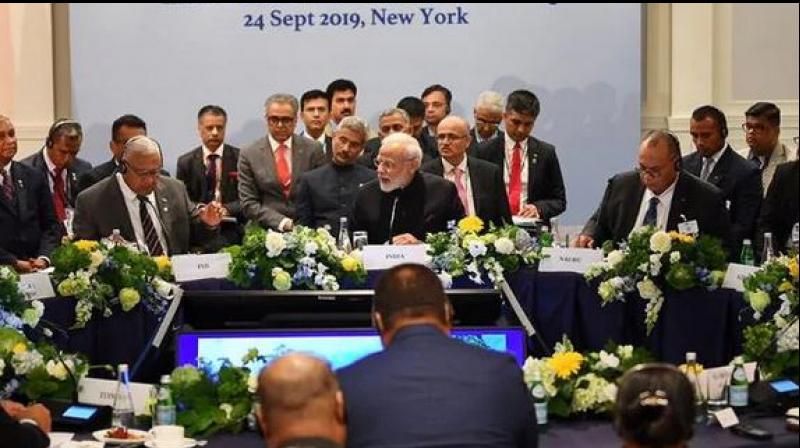 MEA Spokesperson Raveesh Kumar posted a photo of the prime minister with the leaders of the Pacific Island countries on Twitter. (Photo: MEA Twitter)

This was the first time the prime minister met leaders of the Pacific Islands Developing States (PSIDS) in a plurilateral format, it added.

MEA Spokesperson Raveesh Kumar posted a photo of the prime minister with the leaders of the Pacific Island countries on Twitter.

The Ministry also posted a full statement of the meeting.

The leaders deliberated on a wide range of issues, including sharing of development experiences for attainment of sustainable development goals (SDGs), enhancing cooperation in renewable energy, joining the newly-launched Coalition for Disaster Resilient Infrastructure, capacity building, implementation of projects under the India-UN Development Partnership Fund and a roadmap for future India-PSIDS cooperation, it added.

"India's relationship with Pacific Island nations has deepened with the evolution of Act East Policy, resulting in the setting up of the action-oriented Forum for India-Pacific Island Cooperation (FIPIC)," the release said

During the first and second editions of the FIPIC summits in Fiji (2015) and Jaipur (2016), PM Modi had articulated India's desire to be a close partner of the Pacific Island nations and its readiness to work closely to advance their developmental agenda, it added.

During Wednesday's meeting, the prime minister emphasised that India and the PSIDS had shared values and a shared future, and highlighted the need for development policies to be inclusive and sustainable to reduce inequality and contribute to empowerment and improvement of the quality of people's lives, according to the release.

He said India was equally committed to tackle the impact of climate change and supported the efforts of the PSIDS to achieve their developmental goals through necessary developmental and technical assistance.

PM Modi underlined the reality of climate change and called for increasing the share of renewable energy in the total energy mix to mitigate many adverse effects of climate change, the release said.

Expressing India's readiness to share its experiences in developing alternate energy, he voiced satisfaction as many countries from the region had joined the International Solar Alliance and invited others to join this initiative.

The prime minister also invited leaders of the PSIDS to join the Coalition for Disaster Resilient Infrastructure (CDRI).

"In the spirit of his fundamental Mantra ''Sabka Saath, Sabka Vikas aur Sabka Vishwas'' (together with all, for the development of all and with the trust of all) PM Modi announced allocation of USD 12 million grant (USD 1 million to each PSIDS) towards implementation of high impact developmental project in the area of their choice.

"In addition, a concessional Line of Credit of USD 150 Million which can be availed by the PSIDS for undertaking solar, renewable energy and climate related projects based on each country's requirement was announced," the release said.

Reaffirming his commitment to providing developmental assistance for capacity building, the prime minister proposed to depute technical experts to provide training and offered to organise specialised courses also under the ITEC programme in priority areas identified by the partner countries, including training of diplomats from the Pacific Island nations at the Foreign Service Institute, it added.

In the health sector, PM Modi offered to organise a Jaipur Foot Artificial Limb Fitment Camp in a Pacific regional hub under the "India for Humanity" programme.

"To further enhance people-to-people contact, PM announced a Distinguished Visitors Programme under which eminent persons from these countries can visit India. India would also welcome the visit of a Parliamentarian delegation from the PICs to India."

"To continue High-Level engagement, PM extended an invitation to all the leaders for the 3rd FIPIC Summit to be held in Port Moresby in first half of 2020," the release issued by the MEA said.

It added that the leaders of the PSIDS welcomed the initiatives proposed by the prime minister to strengthen engagement and cooperation between the two sides and reassured full support from their respective governments.