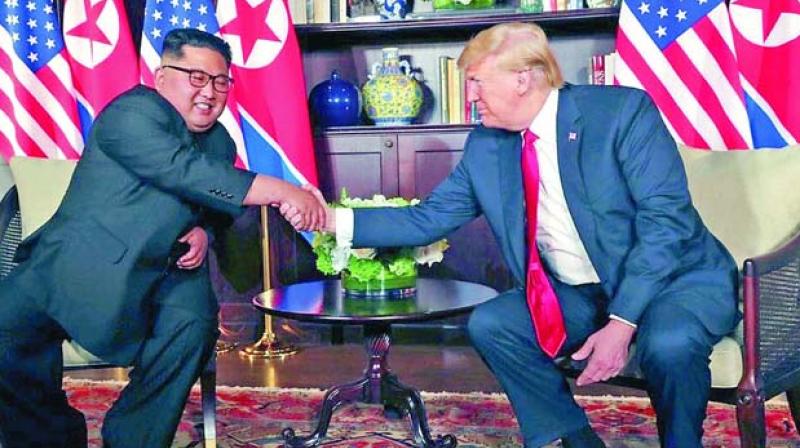 The two leaders held their first historic meeting in Singapore in June but the details of their agreement over disarmament were vague, with no timeline or indication on how the steps towards denuclearisation would be achieved. (Photo: File)

Washington: US President Donald Trump has said he expects to hold a second summit with North Korean leader Kim Jong-un "in the not too distant future" over the progress in the denuclearisation of the Korean Peninsula and praised him for being "very open and terrific".

The two leaders held their first historic meeting in Singapore in June but the details of their agreement over disarmament were vague, with no timeline or indication on how the steps towards denuclearisation would be achieved.

Trump praised Kim as "very open" and "terrific", despite the glacial pace of progress toward denuclearisation on the Korean Peninsula. His comments were in stark contrast to his debut address at last year's general assembly when he threatened to "totally destroy" North Korea and denounced Kim as "rocket man". Pyongyang responded by calling the US president "mentally deranged".

The White House on Monday said the two leaders discussed plans for a second summit between Trump and Kim and committed to closely coordinating the next steps. Moon shared with Trump the outcomes of this month's inter-Korean summit, which included Kim's reiteration of his commitment to completing denuclearisation, the White House said.

"Trump commended President Moon on conducting a successful third inter-Korean summit with Chairman Kim and noted that there remained much work to be done to accomplish their mutual goal of achieving the final, fully verified denuclearisation of North Korea," said a readout of the meeting. The two leaders agreed on the importance of maintaining vigorous enforcement of the existing sanctions to ensure North Korea understands that denuclearisation is the only path to economic prosperity and lasting peace on the Korean Peninsula, it added.

Since the June 12 meeting between Trump and Kim, the North has made overtures to the South and tried to improve its image. While little concrete change has occurred, North Korea has suspended its controversial missile testing, a major source of regional tension.

Kim has promised to dismantle North Korea's main missile testing and launching site, and said he could decommission the main nuclear test site, if the US took some reciprocal action. Some critics have raised concerns that the human rights situation in North Korea has been ignored to ensure better relations.

In the months since the Singapore summit, talks have faltered over North Korea's unwillingness to start dismantling its nuclear weapons programme without first having firmer security guarantees from Washington.