North Korea has vowed to develop a missile mounted with a nuclear warhead that can strike the mainland US. 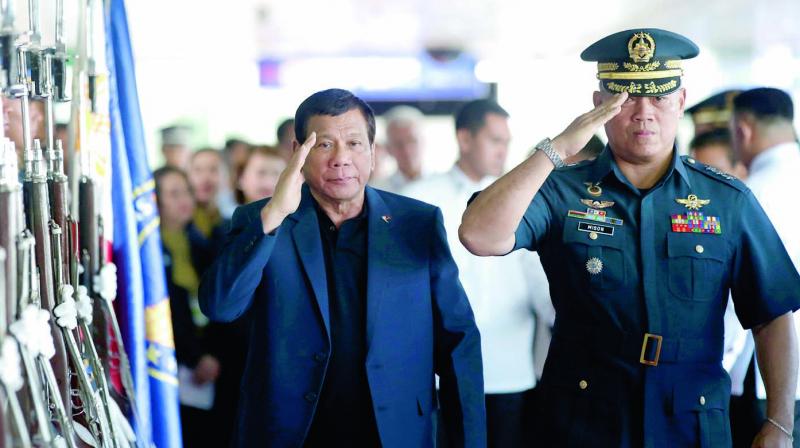 Washington: US  President Donald Trump told his Philippine counterpart that Washington has sent two nuclear submarines to waters off the Korean peninsula, The New York Times said, comments likely to raise questions about his handling of sensitive information.

Mr Trump has said “a major, major conflict” with North Korea is possible because of its nuclear and missile programmes and that all options are on the table but that he wants to resolve the crisis diplomatically.

North Korea has vowed to develop a missile mounted with a nuclear warhead that can strike the mainland United States, saying the programme is necessary to counter US aggression.

Mr Trump told Philippine President Rodrigo Duterte Washington had “a lot of firepower over there”, according to The New York Times, which quoted a transcript of an April 29 call between the two.

“We have two submarines — the best in the world. We have two nuclear submarines, not that we want to use them at all,” the newspaper quoted Mr Trump as telling Mr Duterte, based on the transcript.

The report was based on a Philippine transcript of the call that was circulated on Tuesday under a “confidential” cover sheet by the Americas division of the Philippine department of foreign affairs.

He said, “We can’t let a madman with nuclear weapons let on the loose like that. We have a lot of firepower, more than he has, times 20, but we don’t want to use it,” the US leader said submarines” the Pentagon sent to the area last month.

Mr Trump also queried Mr Duterte about whether he believed Kim was “stable  or not stable.”

Mr Duterte responded that their North Korean counterpart’s “mind is not working and he might just go crazy one moment.” Mr Kim has a “dangerous toy in his hands that could create so much  agony and suffering for all ma-nkind,” he added.