In first under Trump, US warship challenges Beijing's claims in South China Sea 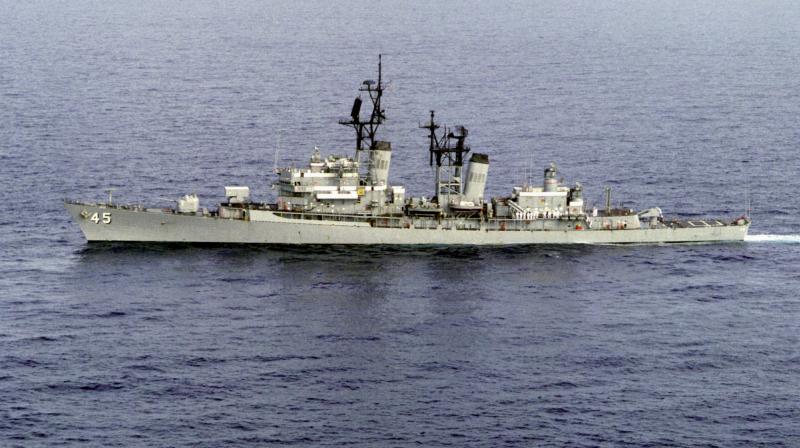 The officials said the USS Dewey travelled close to the Mischief Reef in the Spratly Islands, over which China has territorial disputes with its neighbors. (Photo: Wikimedia Commons)

Washington: A US Navy warship sailed within 12 nautical miles of an artificial island built up by China in the South China Sea, US officials said on Wednesday, the first such challenge to Beijing in the strategic waterway since US President Donald Trump took office.

The officials, speaking on condition of anonymity, said the USS Dewey travelled close to the Mischief Reef in the Spratly Islands, among a string of islets, reefs and shoals over which China has territorial disputes with its neighbors.

The so-called freedom of navigation operation, which is sure to anger China, comes as Trump is seeking Beijing's cooperation to rein in ally North Korea's nuclear and missile programs.

Territorial waters are generally defined by UN convention as extending at most 12 nautical miles from a state's coastline.

One US official said it was the first operation near a land feature which was included in a ruling last year against China by an international arbitration court in The Hague. The court invalidated China's claim to sovereignty over large swathes of the South China Sea.

The US patrol, the first of its kind since October, marked the latest attempt to counter what Washington sees as Beijing's efforts to limit freedom of navigation in the strategic waters.

The United States has criticized China's construction of the man-made islands and build-up of military facilities in the sea, and expressed concern they could be used to restrict free movement.

US allies and partners in the region had grown anxious as the new administration held off on carrying out South China Sea operations during its first few months in office.

Last month, top US commander in the Asia-Pacific region, Admiral Harry Harris, said the United States would likely carry out freedom of navigation operations in the South China Sea soon, without offering any details.

Still, the US military has a long-standing position that these operations are carried out throughout the world, including in areas claimed by allies, and they are separate from political considerations.

The Pentagon said in a statement it was continuing regular freedom of navigation operations and would do more in the future but gave no details of the latest mission.

"We operate in the Asia-Pacific region on a daily basis, including in the South China Sea. We operate in accordance with international law," Pentagon spokesman Captain Jeff Davis said in the statement.

Under the previous administration, the US Navy conducted several such voyages through the South China Sea. The last operation was approved by then-President Barack Obama.

China's claims to the South China Sea, which sees about $5 trillion in ship-borne trade pass every year, are challenged by Brunei, Malaysia, the Philippines, and Vietnam, as well as Taiwan.

The latest US patrol is likely to exacerbate US-China tensions that had eased since Trump hosted Chinese President Xi Jinping for a summit at the US leader's Florida resort last month.

Trump lambasted China during the 2016 presidential campaign, accusing Beijing of stealing US jobs with unfair trade policies, manipulating its currency in its favor and militarizing parts of the South China Sea.

In December, after winning office, he upended protocol by taking a call from the president of self-ruled Taiwan, which China regards as its own sacred territory.

But since meeting Xi at his Mar-a-Lago resort, Trump has praised Xi for efforts to restrain North Korea, though Pyongyang has persisted with ballistic missile tests despite international condemnation.

US-based South China Sea expert Greg Poling of the Center for Strategic and International Studies, said the operation was also the first conducted by the United States close to an artificial feature built by China not entitled to a territorial sea under international law.

Previous freedom of navigation operations have gone within 12 nautical miles of Subi and Fiery Cross reefs, two other features in the Spratlys built up by China, but both of those features are entitled to a territorial sea.

He said the key question was whether the US warship had engaged in a real challenge to the Chinese claims by turning on radar or launching a helicopter or boat -- actions not permitted in a territorial sea under international law.

Otherwise, critics say, the operation would have resembled what is known as "innocent passage" and could have reinforced rather than challenged China's claim to a territorial limit around the reef.