In July, when Trump and Imran met at White House for first time, US President claimed that Modi asked him to mediate on the Kashmir issue. 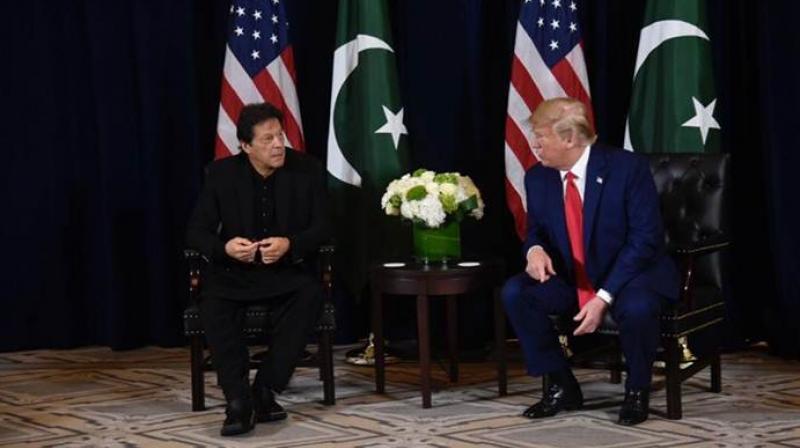 US President Donald Trump third time renewed his offer of arbitration between India and Pakistan on Monday ahead of a meeting with Pakistani Prime Minister Imran Khan. (Photo: Twitter/ Pakistan Information Minister)

New York: US President Donald Trump third time renewed his offer of arbitration between India and Pakistan on Monday ahead of a meeting with Pakistani Prime Minister Imran Khan. The offer came barely 24 hours after he shared a stage with Prime Minister Narendra Modi at a huge public meeting in Houston and emphasised the US stand to "free the world of radical Islamic terrorism".

At the beginning of meeting with Imran Khan on Monday, President Trump said if both Imran Khan and PM Modi wanted him to mediate an agreement between them on Kashmir, he was "ready, willing and able".

"I trust Pakistan... Want to see everyone treated well in Kashmir... I have a very good relation with Prime Minister Modi. I have a very good relationship with Prime Minister Khan. If they both say 'we have a point to iron out', I will be ready to do it," he told reporters, Imran Khan at his side. "I think I'd be an extremely good arbitrator," he added.

Without naming Pakistan, Modi said, “Some people have problems with what India is doing. Those people are not able to tackle their country. They have made their country the place of hate. These people are those who spread terrorism.”

PM Modi said they have "made hatred towards India the centre of their agenda. They support terror, they harbour terrorists".  "Whether it is 9/11 in America or 26/11 in Mumbai, where are its conspirators found? Not just you, the whole world knows who these people are," he added.

Modi’s statement on terror emanating out of Pakistan came after the US President said that he was committed to saving innocent lives from “radical Islamist terrorism”.

In July, when Trump and Imran met at the White House for the first time, the US President had claimed that Modi had asked him to mediate on the Kashmir issue when they met in Osaka, Japan on the sidelines of the G-20 Summit last month.