World's first yoga university outside India launched in US 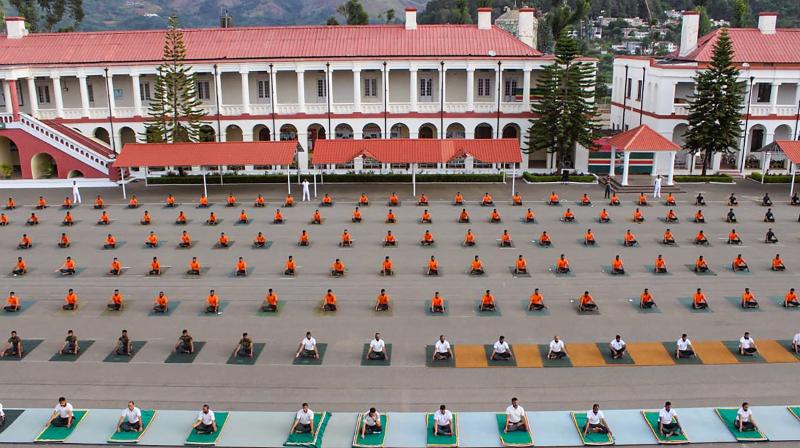 New York: As part of the 6th International Yoga Day commemorations, the world's first yoga university outside India has been launched in Los Angeles, offering programmes that combine scientific principles and modern research approaches to the ancient Indian practice of yoga.

The Vivekananda Yoga University (VaYU) was jointly launched on Tuesday by Minister of State for External Affairs V Muraleedharan and Chairperson of the Standing Committee on External Affairs P P Chaudhary during a virtual event held at the Consulate General of India in New York.

Addressing the virtual launch, Muraleedharan said Swami Vivekananda gave the message of universal brotherhood from the US and through the first of its kind yoga university outside India, the message of yoga will be broadcast from America to the world.

"As the symbol of India's culture and heritage, yoga has become the means for unity and brotherhood in the world. Through the medium of yoga, we can give the message of world peace," he said, adding that "yoga provides mental balance and emotional stability."

The event was jointly hosted by the Consulate General and Jaipur Foot USA Chairperson and founding director of VaYU Prem Bhandari.

In his message, Nagendra, well known as the yoga consultant to Prime Minister Narendra Modi, said Swami Vivekananda heralded the grandeur of Indian yoga dimension to the world through his famous speech in Chicago in 1893.

Inspired by his teachings and the solutions he has given to meet challenges of the modern era, we took up this entire process of bringing yoga into the academic dimension, he said.

"We want to bring this integrated dimension of healthcare to world at large - allopathy and the AYUSH systems, he said referring to the practice of Ayurveda, Yoga & Naturopathy, Unani, Siddha and Homoeopathy.

India's Consul General in New York Sandeep Chakravorty said that New York has deep ties with yoga as many years ago Swami Vivekananda spent time in the city and wrote books on yoga which popularised the Indian practice all over the world.

"It helped in making the US the adopted home of yoga," Chakravorty said, applauding the efforts of Nagendra and Bhandari for the initiative.

He underscored that VaYU will involve top line research on yoga and further popularise it in America, where currently about 40 million people practice yoga regularly.

He noted that in the years to come, VaYU would produce best modern day yoga practitioners who would not only spread peace but make planet Earth a better place to live.

The university is a prime example of people to people connections between India and the US, he said.

Chaudhary said yoga makes the human immune system very strong and is a bridge between the mind and body, which is very important in today's times.

He said the university will help thousands of yoga teachers in the US whose yoga education was limited to 200 or 500 hours of certificate programmes to progress further into university-based higher education.

He highlighted that Modi was instrumental in getting the UN to declare June 21 as International Day of Yoga, saying this further popularised yoga across the world.

In congratulatory messages, Indian spiritual leader Sri Sri Ravi Shankar said in these trying times, the practice of yoga has kept life going and for the very first time, a university espousing yogic science is being launched in the US.

Through the scientific appraisal of yoga, I'm sure millions more will get benefit of it, he said terming the launch of the world's first yoga university outside India as a milestone in the world of yoga.

Yoga guru Baba Ramdev said that the launch of the yoga university is a matter of pride and expressed confidence that VaYU will enhance India's pride for years to come in the field of yoga research.

Former Director General of Border Security Force K K Sharma said that yoga is the best system of exercise and recalled how he had introduced it in place of PT exercise and noticed a perceptible improvement in the overall physical and mental health of the force.

Founded on the principles of Swami Vivekananda's prescription for universal welfare, VaYU will offer online graduate programmes based on scientific principles and modern research approaches to yoga.

VaYU faculty has been recruited from SVYASA, the first Yoga university in India.

It will facilitate collaborative research, credit transfers and joint programmes with multiple premier universities across the world.

The university will offer online master's program in Yoga. The applications for fall 2020 semester are open with the first day of classes starting on August 24 in a virtual mode.

The launch comes within three months of receiving official recognition from the Bureau for Private Post-secondary Education, California to offer yoga-based higher education programmes in November 2019.