The dramatic tension between the US and Iran spiralled over months and several key incidents led to the present crisis. 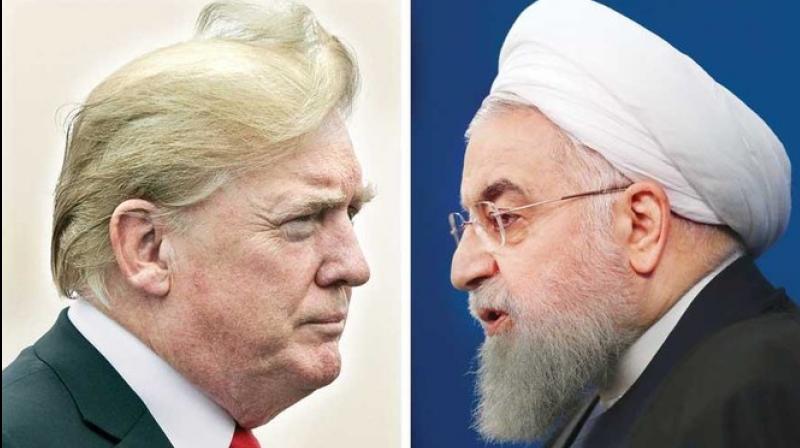 The tension between Iran and the US has been soaring since the day US President Donald Trump decided to withdraw from the Iran nuclear deal. (Photo: AP)

The tension between Iran and the US has been soaring since the day US President Donald Trump decided to withdraw from the Iran nuclear deal.

On Friday, Trump tweeted that he called off a military strike on Iran. The attack was intended to be in retaliation to the shooting down of a US drone by Iranian forces.

The dramatic tension between the US and Iran spiralled over months and several key incidents led to the present crisis.

Here is how they reached the present state:

As Donald Trump's 'America first' slogan started to sneak into the presidential campaigning, the dismissal of Iran's nuclear deal too became obvious.

On May 8, 2018, the widely anticipated act became official.

"I made clear that if the deal could not be fixed, the United States would no longer be a party to the agreement," Trump said.

"Therefore, I am announcing today, that the United States will withdraw from the Iran nuclear deal," he added.

What is Iran Nuclear deal?

Joint Comprehensive Plan of Action (JCPOA) or widely known as Iran nuclear deal is an international accord to curtail Iran's nuclear weapon ambitions.

It worked like a barter; six countries and the European Union-China, France, Russia, the UK, the United States and Germany - offered billions of dollars in sanctions relief to Tehran and in exchange Iran would take steps to curb its ability to make a nuclear bomb.

Why US withdrew from Nuclear deal?

Trump cited various reasons to back his highly controversial decision. Former President Barack Obama, French President Emmanuel Macron and others warned Trump that withdrawal from the accord would lead to an armed conflict.

However, Trump called this Obama-era legislation as “decaying and rotten”.

The US will “not be held hostage to nuclear blackmail” or allow “a regime that chants “Death to America” to gain nuclear weapons, Trump added.

Trump argued that Iran was not going in line with the accord and violating the core values of the deal.

"The Iranian regime supports terrorism and exports violence, bloodshed and chaos across the Middle East. That is why we must put an end to Iran's continued aggression and nuclear ambitions. They have not lived up to the spirit of their agreement," he said in October 2017.

However, it is believed that one of the reasons to rescue the US from the deal was to favour its allies Israel and Saudi Arabia, they too conclude that ''Iran lied'' about its nuclear ambitions.

Interestingly, Trump nor the chief foreign countries have given any evidence to prove that Iran wasn't complying with its obligations.

US’ 12 demands for a new agreement for Iran:

Secretary of State Mike Pompeo on May 21, 2018, laid Trump administration's demand for a new agreement for Iran.

Pompeo asked Iran to give a full report of its nuclear programme and withdraw support for proxy groups in the region.

First round of sanctions:

In a major setback to Iran, on August 7, 2018, US re-imposed the first round of sanctions.

This badly affected business transactions with Iran and sectors like aviation, carpets, pistachios and gold felt a major jolt.

Second round of sanctions:

Intensifying its attack on Iran, the second round of sanctions were imposed to specifically target oil and banking sectors.

Marking April 8, 2019, as a major date in the sheet of events, Trump designated a powerful arm of the Iranian military, its Islamic Revolutionary Guard Corps (IRGC) as a foreign terrorist organisation.

The US president said in a statement that the move "recognises the reality that Iran is not only a state sponsor of terrorism, but that the IRGC actively participates in, finances, and promotes terrorism as a tool of statecraft".

The designation "makes crystal clear the risks of conducting business with, or providing support to, the IRGC," Trump said. "If you are doing business with the IRGC, you will be bankrolling terrorism."

The designation would now allow the US to restrict the entry of people who have any affiliation to IRGC. There are many European and Asian entities and businessman that deal with the IRGC. Hence it was seen as a way to complicate diplomacy.

In this unarmed war, Iran responded by declaring the US as "state sponsor of terrorism" and labelled US forces in the region "terrorist groups."

US sends aircraft carrier, bomber planes to the Persian Gulf:

On May 5, 2019, National Security Adviser John Bolton announced that “in response to a number of troubling and escalatory indications and warnings,” the US will send an aircraft carrier and bomber planes to the Persian Gulf.

"The United States is not seeking war with the Iranian regime, but we are fully prepared to respond to any attack, whether by proxy, the Islamic Revolutionary Guard Corps or regular Iranian forces," Bolton said in a statement.

Witnessing the new tension coming, Iran warned that it would breach some components of the nuclear deal.

Iranian President Hassan Rouhani said Iran would start to hoard low-enriched uranium and heavy water beyond the limits allowed under the nuclear deal.

Rouhani also gave an ultimatum of 60 days to the other members. It sought help to curtail the US sanctions and ease economic pressure (The ignorance of the warning means Iran coming a little closer of getting a nuclear bomb).

Starting today, Iran does not keep its enriched uranium and produced heavy water limited. The EU/E3+2 will face Iran's further actions if they can not fulfill their obligations within the next 60 days and secure Iran's interests. Win-Win conditions will be accepted.

On May 13, 2019, two oil tankers and two other ships were attacked in the Strait of Hormuz, a crucial waterway through which most Gulf oil exports pass.

Bolton said Iran was likely behind the attacks and US officials later release a video that allegedly showed Iran’s involvement.

Iran, however, denied the allegation and called the mysterious attack as "alarming and regrettable".

In past, Iran had frequently threatened to close the strait in case of a military confrontation with the United States.

On May 24, 2019, Trump decides to send an additional 1,500 troops and other “defence capabilities” to the Middle East to increase protection of American forces deployed in the area.

On the same day, Iran echoed the terms of its ultimatum of exceeding the threshold defined under the deal on its stockpile of low-enriched uranium.

Iran shoots down US military drone down:

On June 20, 2019, Iranian forces shot down a US military drone. Both the nation agreed that the incident happened but clashed over the location.

The US claimed that the drone was flying above international waters; Iran said it was in Iranian airspace.

Trump calls off an attack:

On June 21, 2019, Trump tweeted that he called off an attack intended as a retaliatory action against the destruction of a surveillance drone.
Trump cancelled the last action as it was "not proportionate to shooting down an unmanned drone".

....On Monday they shot down an unmanned drone flying in International Waters. We were cocked & loaded to retaliate last night on 3 different sights when I asked, how many will die. 150 people, sir, was the answer from a General. 10 minutes before the strike I stopped it, not....

....proportionate to shooting down an unmanned drone. I am in no hurry, our Military is rebuilt, new, and ready to go, by far the best in the world. Sanctions are biting & more added last night. Iran can NEVER have Nuclear Weapons, not against the USA, and not against the WORLD!

On 22 May 2019, US media said Washington launched cyber attacks against Iranian missile control systems and a spy network this week after Tehran shot down a US surveillance drone. However, Iran denied.