Modi arrives in the US Capitol on Saturday night on a three-day visit during which he would have a meeting with Trump at the White House. 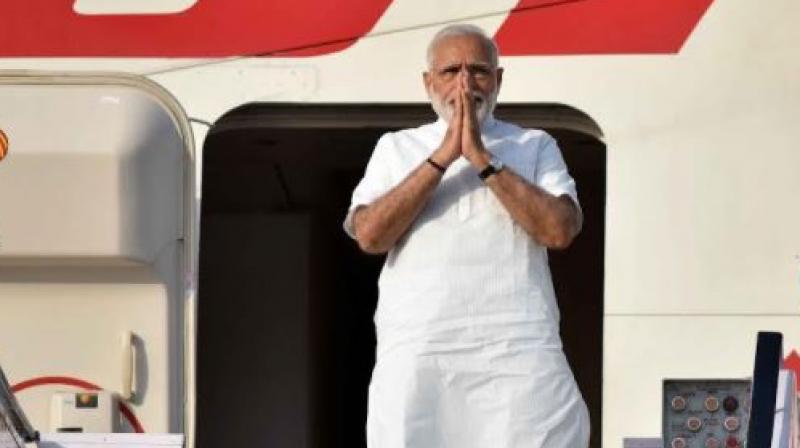 Washington: Seeking to "roll out a red-carpet welcome" to Prime Minister Narendra Modi, US President Donald Trump would host him for a working dinner at the White House on Monday, the first of its kind under the administration.

"The White House is very interested in making this a special visit. We're really seeking to roll out the red carpet. In fact, the two (leaders) will have dinner, a working dinner at the White House.

Modi arrives in the US Capitol on Saturday night on a three-day visit during which he would have a meeting with Trump at the White House.

Beginning Monday afternoon, the two leaders would spend several hours together in various settings including one-o-one, delegation level, a reception and conclude with a working dinner.

"They'll start off with a one-on-one meeting. They'll go from the one-on-one meeting to the bilateral meetings. That will last for about an hour. Then they will each give press
statements," the official, said clarifying that it would not be a press conference.

"They'll move from the press statements to a cocktail reception. And that will be followed by the working dinner. So it's a long interaction, lots of time for the two leaders
to get to know each other, to interact on the critical issues that face our two countries," the official said.

During the meetings, the American side would be represented by top leaders including the Vice President Mike Pence, the National Security Advisor, Lt. Gen. H R McMaster,
and the Secretary of State, Rex Tillerson, Defense Secretary James Mattis, the Commerce Secretary Wilbur Ross, and the Treasury Secretary Steven Mnuchin.

The Modi trip, the official said is an opportunity to strengthen the US-India strategic partnership, which Trump very much views as a critical partnership in promoting stability and security in the Asia Pacific region and globally.

"We anticipate that their discussions will be broad- ranging, hitting on a variety of regional and global issues that would seek to advance our common priorities, including
fighting terrorism, promoting economic growth and prosperity," the official added.

Noting that the US is very much interested in facilitating India's defence modernisation, and helping to enhance its role as a leader in the Asia Pacific, the official said the Trump Administration believes that a strong India is good for the US.

"Now, of course, we've seen rapid growth in the defence and security partnership over the last few years, and President Trump very much wants to build on that momentum.

And last year's designation of India as a major defence partner was extremely important, and I think we'll see a concrete expression of this important designation during this visit," said the senior White House official.

The Trump Administration, the official said, believes that defence trade strengthens both the countries' security, it reinforces the strategic partnership, and it allows their armed forces to cooperate more closely and improve their interaction with one another.

Observing that this defence trade has supported thousands of American jobs, the official said since 2008, India has signed over USD 15 billion in defence contracts with the US. Counter-terrorism would be another major area of discussion.

"The US and India are both committed to combating all forms of terrorism and strengthening their cooperation in areas like terrorist screening, intelligence and information sharing, terrorists' use of the Internet, and, of course, terrorist designations," the official said.

"I think we can expect to see some new initiatives on counter terrorism cooperation," the official said.

Among other things, Modi and Trump will also be discussing global cooperation and things like burden-sharing. Mentioning that India has committed more than USD3 billion in development aid to Afghanistan, the official said the US views India's role in Afghanistan as very positive in helping to stabilise the country and promote democracy there.

Noting that India has also adopted UN sanctions against North Korea in April, the official said India joins the US in sending a very strong message to the North Korean regime.

"This visit will provide an opportunity for both countries to restate their commitment to common principles in the strategically vital important region of the Indo-Pacific.

This includes freedom of navigation and overflight," the official asserted.

In the trade and investment area, India and the US are committed to "expanding and balancing" their trade relationship, the official said.

"Right now, two-way trade in goods and services totals over USD 114 billion. Now, there are challenges in the trading sphere, and both sides look to increase their market access," the official added.

Observing that the US is looking for things like stronger intellectual property protections, reductions in tariffs, the official said this visit offers an opportunity to advance that trade dialogue and look for opportunities that will enhance prosperity and create jobs for both countries.

Energy partnership is one aspect of the economic relationship that has not been highlighted as much in the past, the official said, adding that this would be an important part of the trip.

Indian energy companies have signed over USD 32 billion in long-term contracts for the export of US-produced liquefied natural gas, including from Louisiana and Maryland, he said.

"Today, nearly four million Indian Americans are in the United States, and more than 166,000 Indian students are studying in the US, contributing USD 5 billion in economic
activity and supporting an estimated 64,000 American jobs," the official said.

Modi's visit to the US, the first under the Trump Administration -- offers an opportunity for relationship-building, the official said.

"I think these two leaders have a lot in common. For one, they are the world's two most followed political leaders on social media.

I think President Trump is slightly ahead of Modi, but I think this shows the kind of leaders they are. They're both innovators, they're both businessmen, they're committed to bringing greater prosperity to their people and thinking about innovative ways to do that," the official noted.

"I think they're going to find a lot of common ground in their discussions, both personally and in terms of the strategic partnership," said the senior administration official.