The Trump Organization plans to get local real estate developers and their investors to foot the bill, as do most major hotel chains. 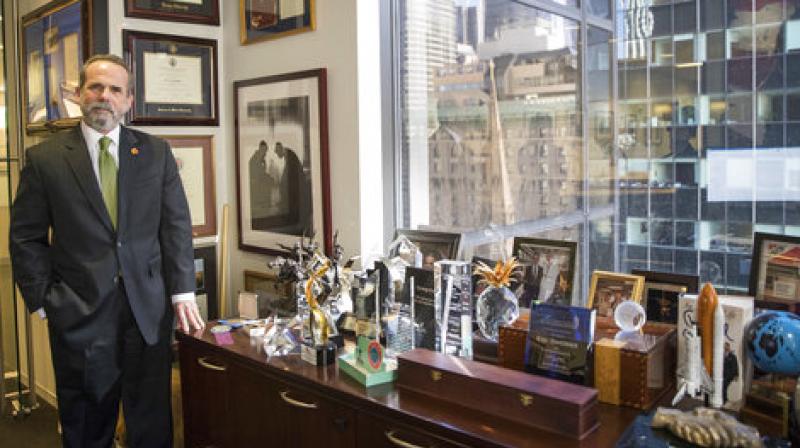 Trump Hotels CEO Eric Danziger said he hopes to open 50 to 100 Scions in three years, and already has letters of intent with more than 20 developers. (Photo: AP)

New York: The Trump family is launching a new hotel chain in a bold expansion of a company that critics say is already too big and opaque for an enterprise whose owner sits in the Oval Office.

The chain, called Scion, will feature the first Trump-run hotels not to bear the family's gilded name. The hotels will feature modern, sleek interiors and communal areas, and offer rooms at USD 200 to USD 300 a night, about half what it costs at some hotels in Trump's luxury chain.

And they'll be dozens of them, possibly a hundred, opening across the country in just three years. Or at least that's the plan.

"It's full steam ahead. It's in our DNA. It's in the Trump boys' DNA," said Trump Hotels CEO Eric Danziger. The "boys" are Eric and Donald Jr., who are running their father's company while he is president.

The bold expansion plan raises some thorny ethical questions. The Trump family won't be putting up any money to build the hotels. Instead, their company, the Trump Organisation, plans to get local real estate developers and their investors to foot the bill, as do most major hotel chains.

One of the first going up could be in Dallas. A development company there originally planned to raise money from unnamed investors in Kazakhstan, Turkey and Qatar, but recently told the Dallas Morning News that it now will tap only the company's US partners.

Government ethics experts say turning to outside money, whether foreign or American, raises the specter of people trying to use their investment to gain favor with the new administration - like contributing to a political campaign, but with no dollar limits or public disclosure.

"This is the new version of pay-to-play, 'Get in there and do business with the Trump Organisation,'" said Richard Painter, who was the chief White House ethics lawyer to President George W. Bush.

The Trump family will have to overcome some political obstacles, too. Already, politicians in a few cities mentioned as possible sites have vowed to fight the first family, raising the prospect of a struggle to get zoning and other permits to start building.

The son of German and Polish refugees from World War II, CEO Danziger is no stranger to long odds. He never went to college, instead taking a job as a bellman at a San Francisco hotel at 17. He worked himself up over the decades to CEO spots at several major hospitality companies.

When Danziger led Starwood Hotels and Resorts in the 1990s, he expanded the number of hotels from 20 to nearly 600.

The 62-year-old executive has similar ambitions for the Trump family. He said he hopes to open 50 to 100 Scions in three years, and already has letters of intent with more than 20 developers, the last three signed in just one week earlier this month. He said he also is planning to add to Trump's existing line of luxury hotels.

Danziger took over Trump's hotel business in August 2015 with hopes of adding to the company's string of properties abroad. A review of trademark databases by The Associated Press shows the Trump family has applied for rights to use the Scion name in several countries, including China, Indonesia, Canada and 28 nations in Europe. An application for trademark rights in the Dominican Republic was approved as late as December.

Then President Trump held a news conference the next month and basically killed the international plans. A week before he took office, he pledged that his company would strike "no new foreign deals" while he was president to allay concerns that foreigners might try to influence US policy by helping his business abroad.

Critics note that hasn't stopped his company from expanding one of its Scottish resorts, pursuing two Indonesian projects that are largely unbuilt and looking to revive an old deal for a beachfront Dominican Republic resort that appeared dead years ago.

The company has said these were already in the works, so they don't fall under the president's pledge. At a panel discussion at a recent hotel industry conference, Danziger said the US offers plenty of opportunity for expansion. As possible cities for new hotels, he mentioned Seattle, San Francisco, Denver and Dallas.

That didn't go down well with some local power brokers. Mark Farrell, a San Francisco supervisor who heads the land use committee, scoffed at the idea of a Trump hotel getting permission to build in his city, telling a CBS affiliate "Good luck with that."

In Seattle, councilmember Rob Johnson told the AP he'd be "shocked" if any Trump hotels got built, calling his city "ground zero" for Trump resisters. In January, thousands took to the streets there to protest the president's first attempt at a travel ban and the city council passed a unanimous resolution denouncing it.

St. Louis, another possible Scion target, may prove a tough sell, too. A few days after the presidential election, protesters marched in front of a building that had been rumored as the site of a new Trump hotel as they chanted "No to Trump Tower."
The developer of the St. Louis project, Alterra Worldwide, is also the company behind the possible Scion hotel in Dallas.

It announced soon after the St. Louis protest that it would use the building there to open a hotel under the Marriott name. Despite the St. Louis trouble, Alterra President Mukemmel "Mike" Sarimsakci said, he expects no trouble with his Dallas project.

For starters, he appears to have much of the local approval needed to move forward. Both Sarimsakci and a Dallas city hall spokeswoman said Alterra is not seeking rezoning or tax incentives, which will avoid any need for a vote of the city council to approve the hotel.

Sarimsakci doesn't think anti-Trump sentiment will hurt the Scion chain. "I think it's passed. I think people had really strong feelings prior to the election," he said. "I don't see that as being an issue moving forward."

Sarimsakci spoke to the AP last month. He did not respond to requests to confirm that he no longer plans to use foreign investors.

Danziger also shrugs off the danger from anti-Trump folks. Stopping a Scion from opening would hurt a city, he said, just as surely as it would hurt the Trumps. "Why would a city because of political views, a city councilman's views, prohibit tax revenue from coming to the city and employment to the people?" Danziger said. "It doesn't make sense."

He also expressed confidence Scion will avoid ethical trouble. He said any new investors in Scion go through an "exhaustive, thorough" review to make sure, for instance, they're not offering sweetheart deals to the Trump family to curry favor with the president.

Before Trump took office, he hired an outside lawyer to vet his deals for conflicts. Critics say his company shouldn't be striking any new deals at all and that he should follow the precedent of modern presidents by selling his interest in the company. He has refused to do so.

Politics aside, Trump's new chain faces stiff business challenges. The US president is a tiny hotel operator, with just 14 properties that he either owns or licenses his name to or manages for others, according to his company's website.

This puts it at a disadvantage compared with, say, Marriott International, which has more than 6,000 hotels and can get deeper discounts when purchasing insurance and food and linens. The bigger companies have powerful loyalty programs to lure travellers, too.

"Why do people stay at Marriotts all the time?" said Bjorn Hanson, professor of hospitality and tourism management at New York University. "They're earning points."

Trump's Scion chain also faces a fight for customers against an array of new chic "lifestyle" chains from Marriott, Hilton and other rivals. Furniture retailers West Elm and Restoration Hardware are opening hotels to appeal to young travellers. Even the gym chain Equinox recently announced plans to enter the crowded field.

Danziger said he's not worried. "Every industry on the planet is crowded." He won't name the developers with whom he has letters of intent, or where they hope to build, noting that they're tentative deals that could easily fall though.

Pressed, though, he rattled off a long series of cities seemingly at random, including Cincinnati, Milwaukee and Louisville, Kentucky. "The list of places Scion can go," he said, "is virtually limitless."