Without naming Pakistan, Modi said, 'Some people have problems with what India is doing.' 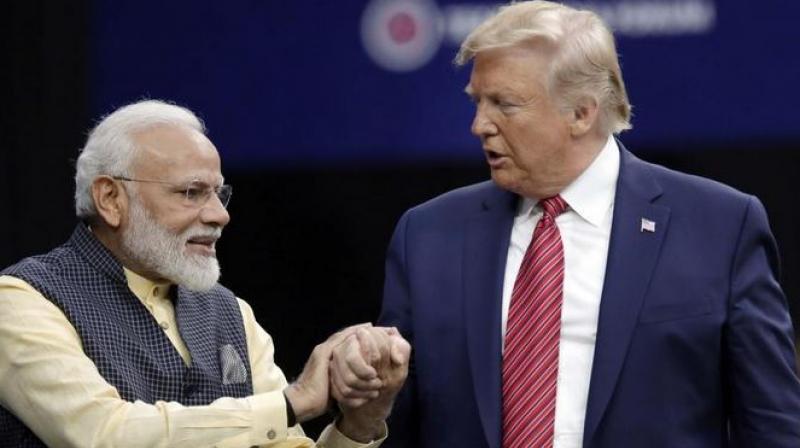 Modi’s statement on terror emanating out of Pakistan came after the US President said that he was committed to saving innocent lives from 'radical Islamist terrorism'. (Photo: AP)

Houston/New Delhi: Prime Minister Narendra Modi on Sunday asserted that the government’s move to “bid farewell to Article 370” was to end discrimination and terrorism. In a tacit warning to Pakistan, Modi said, “The time has come for a decisive fight against terrorism and those who support terrorism.”

The Indian Prime Minister shared stage with the United States President at the mega public meeting at Houston, where PM Modi described the scrapping of Article 370 as one of the achievements of his government within its first 100 days.

Defending the move, Modi at the rally said that due to Article 370, people of Kashmir and Ladakh were not getting the benefits of development and some separatist powers were misusing it to further their own agenda.

“Our Parliament Upper house and lower house discussed it for hours and it was telecasted across the world...We (the BJP) don't have majority in upper house yet we passed it both houses with 2/3rd majority,” he said, and asked people to give a standing ovation to Indian parliamentarians for the nod to repeal Article 370 provisions.

Without naming Pakistan, Modi said, “Some people have problems with what India is doing. Those people are not able to tackle their country. They have made their country the place of hate. These people are those who spread terrorism.”

PM Modi said they have "made hatred towards India the centre of their agenda. They support terror, they harbour terrorists".  "Whether it is 9/11 in America or 26/11 in Mumbai, where are its conspirators found? Not just you, the whole world knows who these people are," he added.

Osama Bin Laden, the perpetrator of 9/11 attacks in the US, was killed in 2011 by US forces at his hideout in Pakistan's Abbottabad after a decade-long manhunt. The 26/11 attacks in Mumbai were planned and executed by terrorists of Pakistan-based Lashkar-e Taiba.

Modi’s statement on terror emanating out of Pakistan came after the US President said that he was committed to saving innocent lives from “radical Islamist terrorism”.

On the last day of his visit, the Prime Minister is expected to address the UN General Assembly on September 27. Pakistan Prime Minister Imran Khan is also expected to speak at the meet and raise the government's move in Jammu and Kashmir.