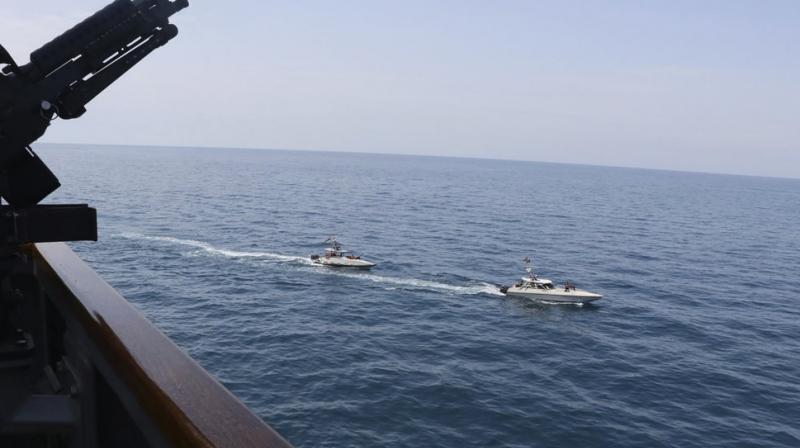 A group of 11 Iranian naval vessels made "dangerous and harassing" maneuvers near U.S. ships in the Persian Gulf near Kuwait on Wednesday (AP)

Tensions between Washington and Tehran flared anew Wednesday as Iran’s Revolutionary Guard conducted a space launch that could advance the country’s long-range missile program and President Donald Trump threatened to “shoot down and destroy” any Iranian gunboats that harass Navy ships.

The launch was a first for the Guard, revealing what experts described as a secret military space program that could accelerate Iran’s ballistic missile development.

American officials said it was too early to know whether an operational Iranian satellite was successfully placed into orbit. Trump’s top diplomat accused Iran of violating U.N. resolutions.

After Iran’s announcement, Trump wrote on Twitter, without citing any specific incident, “I have instructed the United States Navy to shoot down and destroy any and all Iranian gunboats if they harass our ships at sea.”

Last Wednesday, the U.S. Navy reported that 11 Guard naval gunboats had carried out “dangerous and harassing approaches” to American Navy and Coast Guard vessels in the Persian Gulf.

The Americans used a variety of nonlethal means to warn off the Iranian boats, and they eventually left. Such encounters were relatively common several years ago, but have been rare recently.

At the Pentagon on Wednesday, the vice chairman of the Joint Chiefs of Staff, Gen. John Hyten, welcomed Trump’s tweet as a useful warning to Iran. He drew a parallel between last week’s naval encounter in the Gulf and Wednesday’s space launch, which said was “just another example of Iranian malign behavior.”

“And it goes right along with the harassment from the fastboats. ... You put those two things together and it’s just more examples of Iranian malign behavior and misbehavior,” Hyten said.

Trump did not cite a specific Iranian provocation in his tweet or provide details. Senior Pentagon officials gave no indication that Trump had directed a fundamental change in military policy on Iran.

The space launch has potentially bigger implications for conflict with Iran. U.S. officials believe it is intended to advance Iran’s development of intercontinental-range ballistic missiles that could threaten the U.S.