Letter to President: Trump thanks Obama for a 'beautiful' letter

It has long been a tradition for the outgoing US President to leave a letter for the incoming President at the Oval Office. 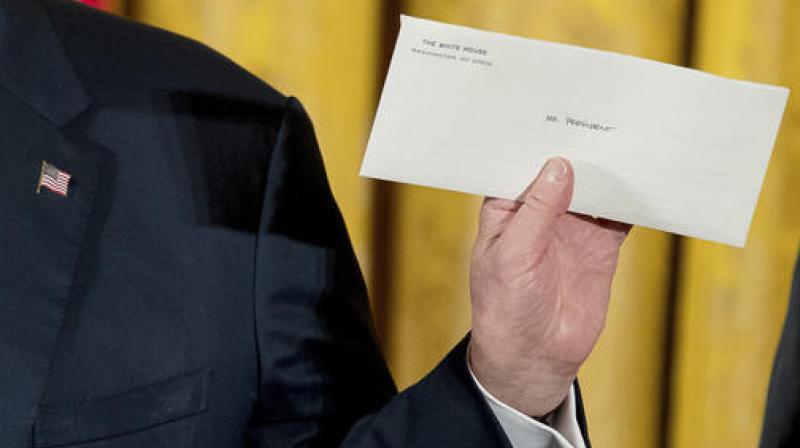 President Donald Trump holds up a letter left for him by former President Barack Obama as he speaks at a White House senior staff swearing in ceremony in the East Room of the White House. (Photo: AP)

Washington: US President Donald Trump has said he will not tell the press what Barack Obama wrote in the "beautiful" letter the outgoing president left for him in the Oval Office.

"I just went to the Oval Office and found this beautiful letter from President Obama," Trump said, addressing senior staff members before they were sworn-in.

"It was really very nice of him to do that and we will cherish that. We will keep that and we won't even tell the press what's in that letter," he was quoted as saying by The Hill.

In the letter President George W Bush left for Obama, Bush said there would be "trying moments" during his presidency and warned Obama that "critics will rage" and said your "'friends' will disappoint you."

"But, you will have an Almighty God to comfort you, a family who loves you, and a country that is pulling for you, including me," Bush wrote.

"No matter what comes, you will be inspired by the character and compassion of the people you now lead," Bush had written.

In the letter President Bill Clinton wrote to Bush in 2001, Clinton saluted the new president and wished him "success and much happiness."

"The burdens you now shoulder are great but often exaggerated. The sheer joy of doing what you believe is right is inexpressible," Clinton wrote.