US govt bound for shutdown as Congress, Trump fail to reach deal

Trump has dug in on his demand for USD 5 billion for construction of a wall on the US border with Mexico. 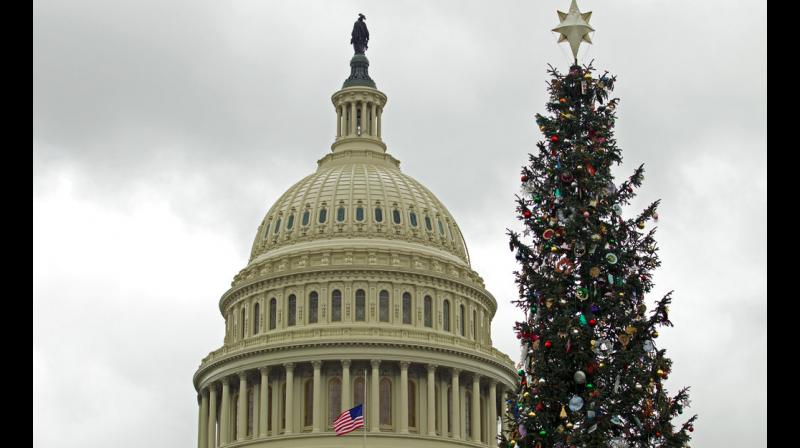 The US government will begin a Christmastime shutdown at midnight. (Photo: AP)

Washington: The US government will begin a Christmastime shutdown at midnight, as Congress adjourned on Friday without passing a federal spending bill or addressing President Donald Trump's demand for money to build a border wall.

Operations for several key agencies will cease at 12:01 am on Saturday, despite last-ditch talks that continued on Capitol Hill between White House officials and congressional leaders in both parties.

Trump has dug in on his demand for USD 5 billion for construction of a wall on the US border with Mexico. Democrats are staunchly opposed, and the absence of an elusive deal means federal funds for dozens of agencies will lapse when the clock strikes twelve.

It remained unclear how long the shutdown will last. But the optics are bad, as 800,000 federal employees will be either furloughed or forced to work without pay in the run up to the Christmas holiday. But the prospect of a large portion of government workers getting lumps of coal instead of paychecks was not enough to spur lawmakers or the president to action.

The House of Representatives adjourned just before 7:00 pm (2300) on Friday, with no moves taken to avert a shutdown, and the Senate closed up shop an hour later. Both are due back in session at noon Saturday.

About three-quarters of the government, including the military and the Department of Health and Human Services, is fully funded until the end of September 2019, leaving 25 per cent unfunded as of Saturday.

Most NASA employees will be sent home, as will Commerce Department workers and many at the Departments of Homeland Security, Justice, Agriculture and State.

National parks will remain open, but most park staff will stay home. While most critical security functions will be operational, the effects of the budget wrangling and uncertainty have cast an air of chaos over the capital.

Wall Street ended its worst week in a decade with more bruising losses on Friday. And the inability of Washington to accomplish one of its most basic tasks -- keeping the government up and running -- has caused deep embarrassment and anxiety.

"It's up to the Democrats whether or not we have a shutdown tonight," Trump said, blaming political opponents for the crisis.

"I hope we don't," the president added, but "we're totally prepared for a very long shutdown." Senators told reporters that congressional leaders from both parties were negotiating behind the scenes with White House officials including Vice President Mike Pence, Trump's son-in-law Jared Kushner, and incoming chief of staff Mick Mulvaney.

The power trio shuttled from one side of the Capitol to the other, seeking a breakthrough with Republicans and Democrats. It did not come on Friday. Should they eventually strike a deal, it could swiftly clear Congress and reach the president's desk, said Senate Republican Bob Corker.

"Now Republicans and Democrats both own the success or failure to fund government." One focus of discussion was the USD 1.6 billion in border security funding that was a part of pending Senate legislation, number two Senate Republican John Cornyn told AFP.

But conservatives in the House would likely balk at that figure. "There's no agreement," congressman Mark Meadows, chairman of the House Freedom Caucus of ultra-conservatives, told reporters as he left a closed-door meeting on the Capitol's Senate side.

"There's a whole lot of numbers being thrown around," but a maximum USD 1.6 billion for border security "is not acceptable." Cornyn suggested the art of the deal was less about grandstanding and more about a logical compromise to break the impasse.

"The House is at five (billion dollars for border security), the Democrats are at zero," he said. "It doesn't sound like that's rocket science to come up with a figure."

Trump reversed course Thursday and rejected a measure that had unanimously passed the Senate and was under House consideration.

It would have extended government funding until February 8, but contained no money for a border wall, a pet project Trump has fought for since his presidential campaign.

Democrats painted Trump as the Grinch who stole the year-end deal. "This #shutdown is brought to you by @POTUS & @HouseGOP," congresswoman Kathleen Rice tweeted. "Instead of passing the Senate's funding bill, they decided to hold this country hostage."

With lawmakers like Meadows and prominent conservative commentators demanding that the president stick to his campaign promises, Trump doubled down on his wall. The House swiftly passed a bill that fulfilled the president's demands. It included USD 5.7 billion in wall funding, and USD 7.8 billion in disaster relief. But it stalled at the first hurdle in the Senate. Trump was scheduled to fly to Florida Friday for his Christmas break, but he postponed the trip to help salvage a deal.