The resolution reaffirmed what has been the United Nations’ stand on the divided holy city since 1967. 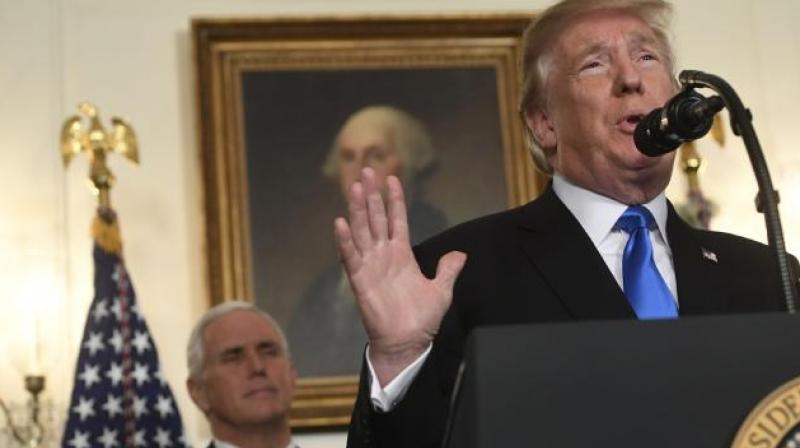 Mr Trump’s pressure tactics had raised the stakes at Thursday’s emergency meeting and triggered accusations from the Muslim world of US bullying and blackmail. (Photo: File)

United Nations: The UN General Assembly voted overwhelmingly on Thursday to denounce President Donald Trump’s recognition of Jerusalem as Israel’s capital, largely ignoring Mr Trump’s threats to cut off aid to any country that went against him.

The nonbinding resolution declaring US action on Jerusalem “null and void” was approved 128-9 a victory for the Palestinians, but not as big as they predicted. Amid Washington’s threats, 35 of the 193 UN member nations abstained and 21 were absent.

The resolution reaffirmed what has been the United Nations’ stand on the divided holy city since 1967- that Jerusalem’s final status must be decided in direct negotiations between Israel and the Palestinians.

The Trump administration made it clear the vote would have no effect on its plan to move the American Embassy from Tel Aviv to Jerusalem. And Israeli Prime Minister Benjamin Netanyahu said afterward that he completely rejects the “preposterous” resolution.

Palestinian Ambassador Riyad Mansour called the vote a victory not only for the Palestinians but for the United Nations and international law, saying US Ambassador Nikki Haley “failed miserably” in persuading only seven countries aside from the US and Israel to vote against the resolution.

“And they used unprecedented tactics, unheard of in the diplomatic work at the UN, including blackmail and extortion,” he said.

The United States and Israel had waged an intensive lobbying campaign against the measure, with Haley sending letters to over 180 countries warning that Washington would be taking names of those who voted against the US Mr Trump went further, threatening a funding cutoff- “Let them vote against us. We’ll save a lot. We don’t care.”

But in the end, major US aid recipients including Afghanistan, Egypt, Jordan, Pakistan, Nigeria, Ethiopia, Tanzania and South Africa supported the resolution. Egypt received roughly USD 1.4 billion in US aid in 2017, and Jordan about USD 1.3 billion.

The nine countries voting “no” were the US, Israel, Guatemala, Honduras, Micronesia, Nauru, Palau, the Marshall Islands and Togo. Among the abstentions were Australia, Argentina, Canada, Colombia, Croatia, Czech Republic and Mexico.

The absent countries included Kenya, which was the fifth-largest recipient of US aid in 2016, Georgia and Ukraine, all of which have close US ties.

After the vote, Ms Haley tweeted a photo naming the 65 nations that voted no, abstained or were absent, and said- “We appreciate these countries for not falling to the irresponsible ways of the UN.”

She later sent invitations to the 65 ambassadors inviting them to a reception on January 3 to thank them for their friendship with the United States.

The US is scheduled to dispense USD 25.8 billion in foreign aid for 2018. Whether Mr Trump follows through with his threat against those who voted “yes” remains to be seen.

But within hours, the Trump administration appeared to be backing away from its funding threats. In Washington, State Department spokeswoman Heather Nauert said cuts to countries that opposed the US are not a foregone conclusion.

“The president’s foreign policy team has been empowered to explore various options going forward with other nations,” Nauert said. “However, no decisions have been made.”

During the debate, Arab, Islamic and non-aligned nations urged a “yes” vote on the resolution, which was sponsored by Yemen and Turkey.

Yemeni Ambassador Khaled Hussein Mohamed Alyemany warned that Trump’s recognition of Jerusalem undermines any chance for peace in the Mideast and “serves to fan the fires of violence and extremism.”

On Wednesday, Mr Trump complained that Americans are tired of being taken advantage of by countries that take billions of dollars and then vote against the US Ms Haley echoed his words in her speech to the packed assembly chamber, threatening not only member states with funding cuts, but the United Nations itself.

“And this vote will be remembered,” she warned.

Mr Trump’s pressure tactics had raised the stakes at Thursday’s emergency meeting and triggered accusations from the Muslim world of US bullying and blackmail.

“It is unethical to think that the votes and dignity of member states are for sale,” said Turkish Foreign Minister Mevlut Cavusoglu. “We will not be intimidated! You can be strong but this does not make you right!”

The Palestinians and their supporters sought the General Assembly vote after the US on Monday vetoed a resolution supported by the 14 other UN Security Council members that would have required Mr Trump to rescind his declaration on Jerusalem.

The resolution adopted by the assembly has language similar to the defeated measure.

It “affirms that any decisions and actions which purport to have altered the character, status or demographic composition of the holy city of Jerusalem have no legal effect, are null and void and must be rescinded.”