The family roundup is likely to begin with pre-dawn raids in up to 10 cities including Houston, Chicago, New York and Miami. 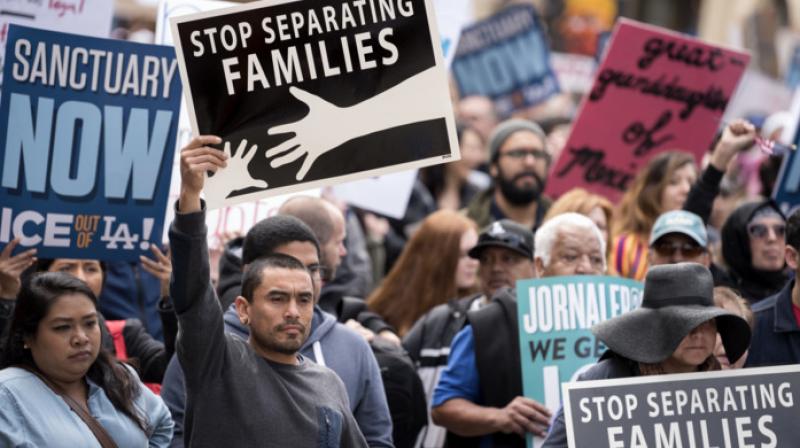 Congress has authorized ICE to detain 40,000 migrants, and many others are sent to other overcrowded facilities across the nation. (Photo: AP)

Washington: US President Donald Trump has ordered border agents to begin a mass roundup as early as Sunday of some 2,000 migrant families that have received deportation orders, US media reported Friday.

The news follows the president's announcement on Twitter Monday that US Immigration and Customs Enforcement (ICE) officials would begin deporting "millions of illegal aliens," although he gave little detail.

The tweet sped up operations that were already underway, according to unnamed sources cited by the Washington Post, NBC and CNN.

The family roundup is likely to begin with pre-dawn raids in up to 10 cities including Houston, Chicago, New York and Miami.

Kevin McAleenan, the acting secretary of Homeland Security, is hesitant about parts of the operation, CNN reported.

He has been urging ICE to mainly focus on some 150 families that had attorneys but have dropped out of the legal process and vanished, the Post reported.

The US is facing a surge in migrants from several Central American countries plagued by gang violence and poverty.

The numbers have hampered US authorities' abilities to temporarily shelter and process arrivals.

Trump has called it "an invasion," and has made the fight against illegal migration a central plank of his administration.

An estimated 10.5 million unauthorized immigrants are living in the United States, according to the Pew Research Centre.

Congress has authorized ICE to detain 40,000 migrants, and many others are sent to other overcrowded facilities across the nation.

In 2017 the Trump administration imposed a "zero tolerance" regime on the US border with Mexico, which resulted in hundreds of families being split up.