As trump celebrates tax overhaul, others worried about backlash

Some of the President’s strongest allies conceded that voters may not immediately warm to the new law. 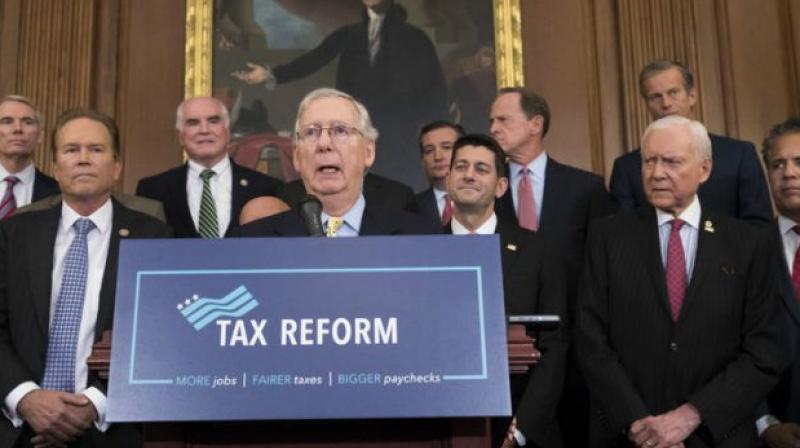 Mr Trump himself complained in a tweet that ‘defeated Dems’ and the media were out to ‘demean’ the tax package but ‘the results will speak for themselves, starting very soon.’ (Photo:

Washington: A triumphant President Donald Trump and jubilant fellow Republicans celebrated the passage of their USD 1.5 trillion tax overhaul on Wednesday as a “historic victory for the American people.” The American people, however, will need some convincing.

As Mr Trump and GOP lawmakers gathered at the White House to cheer their first major legislative achievement and the biggest tax changes in a generation some Republicans warned that the party could face a painful political backlash against an overhaul that offers corporations and wealthy taxpayers the biggest benefits and was projected to trigger the loss of health care coverage for millions of Americans.

There was no hint of anxiety at the White House, though, as the president and congressional Republicans pushed any qualms aside and revelled in a much-needed win at the end of a year marked by GOP infighting and political stumbles.

“I don’t know if we’ll have bigger moments, but we hope to,” said Mr Trump.

The President was expected to sign the bill at a later date for technical reasons. In fact, the signing may be postponed until the start of the new calendar year in order to delay USD 120 billion in automatic cuts to popular programs such as Medicare and spare Republicans from having to explain them in an election year.

The tax package provides a deep cut in the corporate rate, from 35 per cent to 21 per cent. On the individual side, about 80 per cent of American households will get tax cuts in 2018, while about 5 per cent will pay more, according to the nonpartisan Tax Policy Centre.

The cuts will come at a price. The Congressional Budget Office predicts the legislation will add USD 1.4 trillion to the national debt over the next decade.

Some of the President’s strongest allies conceded that voters may not immediately warm to the new law.

Andy Surabian, a senior aide for a pro-Trump super PAC, likened the President’s position to that of Ronald Reagan, who struggled through low approval ratings early in his presidential term after Congress passed a tax cut that led to huge Republican losses in the 1982 midterm elections. Reagan went on to a sweeping re-election in 1984 after the economy improved.

“Even if we don’t start seeing positive effects in 2018, the important thing here is President Mr Trump sets himself up to win re-election in 2020,” said Mr Surabian.

GOP strategists and candidates alike called on MrTrump to launch an immediate public relations tour to sell the plan to help avert an anti-Republican tsunami in 2018.

Only about 1 in 3 voters have supported the legislation in recent days, according to several polls. About half of Americans believe the plan will hurt their personal finances. And 2 in 3 voters say the wealthy will get the most benefits, according to a USA Today/Suffolk University poll released last week

The White House said on Wednesday that Mr Trump will actively promote the bill. Aides argued that media coverage has not accurately portrayed the benefits and that people will come around as they feel the payoff.

Mr Trump himself complained in a tweet that “defeated Dems” and the media were out to “demean” the tax package but “the results will speak for themselves, starting very soon.”

Democrats, who unanimously opposed the tax plan in Congress, were furious about the new policy yet upbeat about the potential political fallout in 2018’s elections. They need to flip 24 House seats and just two Senate seats to take control of each chamber.

Asked if the tax bill will help Republicans hold the House, Minority Leader Nancy Pelosi leaned into a microphone and said, “Let. Them. Think. That.”

The bill goes far beyond taxes.

While it does not repeal the law known as “Obamacare,” the legislation finalised by the House on Wednesday attacks a central tenet of the health care system by eliminating the requirement that all Americans have health insurance. The Congressional Budget Office says elimination of the “individual mandate” will boost health care costs by about 10 per cent for those with coverage and leave 13 million additional Americans without health insurance in 10 years.

Millions of people will still remain covered under the law’s Medicaid expansion and health care exchanges, but Mr Trump cast the package as a shadow repeal.

“We have essentially repealed Obamacare,” the President declared.

On taxes, the first modest effects will be felt in February paychecks.

People living in high-tax states like New York and California may ultimately pay more. Among those who benefit, the wealthy will make out far better than the working-class voters who fuelled Mr Trump’s victory in 2016.

Reflecting the political risks, some of the nation’s most vulnerable House Republicans voted against the bill.

Rep Peter King, R-NY, one of 12 GOP House members to vote no, said the tax plan would hurt many people in high-tax states. The bill imposes a USD10,000 cap on taxpayers who deduct their state, local and property taxes. Currently, there is no limit on how much in state and local taxes you can deduct.

All but one of the GOP no votes came from like-minded Republicans facing re-election in 11 months in moderate districts across New Jersey, New York and California.

The road to a Democratic House majority, if there is one, runs through these districts.

All the salesmanship in the world won’t change the reality that the tax overhaul overwhelmingly favours the rich, Democratic critics said.

“People think it’s unfair. They want tax reform, they don’t want tax cuts for the wealthy,” said Gov. Terry McAuliffe of Virginia. “And I think people will realise they’ve been sold a pig in a poke.”