Rubber stamp formality this time sees high stakes due to severe polarisation in US. 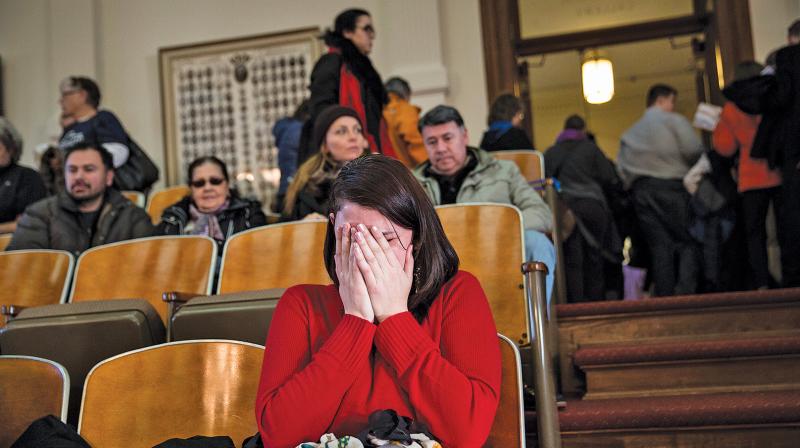 Texas resident Anne Devlin cries in the gallery of the House of Representatives after the Electoral College voted in favour of Donald Trump in Austin. (Photo: AP)

Washington: America’s Electoral College on Monday confirmed Donald Trump’s election as the 45th President of the United States, unswayed by a desperate bid by die-hard opponents to bar the Republican’s path to the White House.

Six weeks after his upset victory over the Democrat Hillary Clinton, Mr Trump sailed as expected past the 270 votes needed to make his victory official according to US media, clearing the way for him to succeed Barack Obama on January 20.

“We did it!” the 70-year-old billionaire tweeted after the results came in. “Thank you to all of my great supporters, we just officially won the election (despite all of the distorted and inaccurate media).”

In a statement released by his team, the President-elect welcomed the “overwhelming vote” in his favor, while reaching out to the Democrats who sought against the odds to block him.

“With this historic step we can look forward to the bright future ahead,” he said. “I will work hard to unite our country and be the president of all Americans.”

Under normal circumstances, the College vote is a little-watched, rubber stamp formality in which electors — most of them party members — officially cast ballots for the candidate that won the popular tally in their state.

This time, however, the divisive nature of the campaign, Mr Trump’s provocative personality, and Ms Clinton’s lead of nearly three million votes in the popular tally combined to raise the stakes.

The Electoral College vote works like this: when US voters cast ballots on November 8, they did not directly elect the President but rather 538 electors charged with translating their wishes into reality.

Mr Trump won a clear majority of those electors: 306.

Democratic activists casting the Republican as a threat to the nation staged a vocal, weeks-long campaign urging electors to break ranks and refuse to vote for him.

To bar Mr Trump’s road to the White House, they needed to convince at least 37 Republican electors to abandon their candidate.

The odds of that happening were considered next to none.

According to a New York Times tally, a total of seven so-called “faithless” electors defected for someone else than their party’s nominee, the biggest number ever.

In Washington state, three of the state’s 12 electoral votes went to former Republican secretary of state Colin Powell and a fourth went to Faith Spotted Eagle, a Native American leader who helped block the Keystone XL and Dakota Access pipelines.

One Texas Republican elector, Christopher Suprun, had publicly said he would not vote for Mr Trump, arguing he is unqualified to be President.

Undeterred by their outside chance of success, protesters rallied Monday at statehouses from Pennsylvania to Texas to Utah as electors gathered across the country to cast their votes.

In Wisconsin, where Mr Trump carried a thin margin that was key to propelling him into the Oval Office, a few protesters chanted “Shame!” as the state’s 10 electoral votes for Mr Trump were announced, the Times reported. “I feel the fate of our nation is at stake here,” protester Ray-Ellen Kavey, 68, said outside the capitol building of Pennsylvania.

“I know nothing will come of this, but my conscience won’t let me do any less.”

In New York, former president Bill Clinton cast one of the state’s 29 electoral votes for his wife. “I’ve never cast a vote I was prouder of,” he said.