Imran Khan arrives in US to reboot bilateral ties; will meet Trump tomorrow

This comes after the US president publicly criticised Islamabad, cancelled military aid and asked it to do more to fight terrorism. 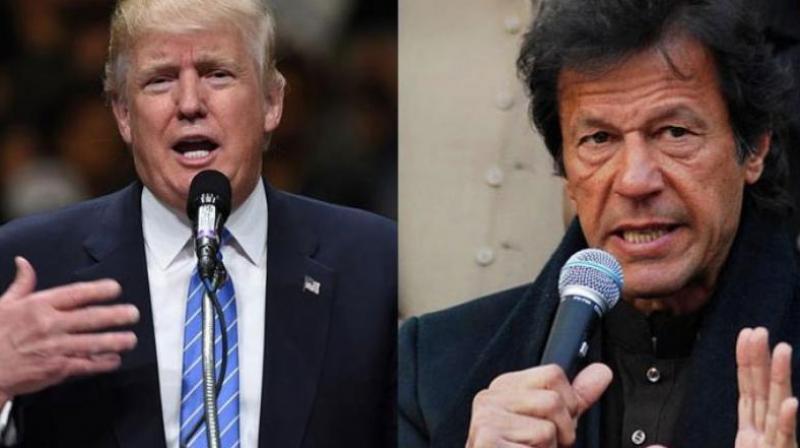 Khan, 66, is scheduled to meet President Trump at the White House on Monday. (Photo: ANI | File)

Washington: Pakistan Prime Minister Imran Khan arrived here on his maiden trip to the US during which he will hold talks with Donald Trump and reboot bilateral ties that were hit after the US president publicly criticised Islamabad, cancelled military aid and asked it to do more to fight terrorism.

Khan, 66, is scheduled to meet President Trump at the White House on Monday during which the American leadership is likely to press him to take "decisive and irreversible" actions against terrorist and militant groups operating from Pakistani soil and facilitate peace talks with the Taliban.

The cricketer-turned-politician arrived here on Saturday afternoon aboard a commercial Qatar Airways flight and is staying at the official residence of the Pakistani Ambassador to the US, Asad Majeed Khan.

He was welcomed at the airport by his foreign minister Shah Mehmood Qureshi. A large number of Pakistani Americans also welcomed him. Nawaz Sharif was the last Pakistani prime minister to visit the US on an official trip in October 2015.

During his three-day visit, Khan, in addition to his meeting with Trump, is also scheduled to meet IMF acting chief David Lipton and World Bank President David Malpass. Secretary of State Mike Pompeo will call on him on Tuesday.

Trump, in addition to a one-on-one meeting in the Oval Office, will host the visiting delegation over a working lunch at the White House on Monday. Khan is also scheduled to meet lawmakers at the US Capitol Hill.

The relations between Pakistan and the US have remained tense during Trump's tenure. The US president has publicly said that Pakistan has given us "nothing but lies and deceit" and also suspended security and other assistance for backing terror groups. Prime Minister Khan is accompanied by Army chief Gen. Qamar Javed Bajwa and spy agency ISI chief Lt. Gen. Faiz Hameed.

Diplomatic sources in Islamabad earlier said that issues like the Afghan peace process, Pakistan government's action against terrorism and terror financing and restoration of military aid to Pakistan would be the highlights of the trip.

Khan's visit comes at a time when talks between the US and Afghan Taliban are thought to have entered a decisive phase. Pakistan's efforts have been appreciated for facilitating peace talks with the Taliban.

Actions like launching of cases of terror financing against Hafiz Saeed, head of the Jamaat ud Dawa are signals aimed at addressing concerns by India and the US. Khan is also scheduled to address a gathering of Pakistani Americans in downtown Washington DC on July 21 and speak at the US Institute of Peace think-tank on July 23.

Before becoming the prime minister, Khan used to visit the US regularly and has a sizeable support base among the Pakistani diaspora. Meanwhile, hours before Khan's arrival, Pakistan hired the services of lobbying firm Holland & Knight.

The memorandum of understanding on this was signed between former Republican Congressman Tom Reynolds and Pakistani Ambassador Majeed Khan. Reynolds will lead a team comprising other former members of Congress, former senior Administration officials, Capitol Hill veterans and other professional experts to lobby in the US on behalf of the Government of Pakistan.

The Embassy had no lobbyist during the past six years. Khan's visit to the US is also marked by protests by several ethnic and religious minorities of Pakistan, including Baloch, Sindhis and Mohajirs.

A bipartisan group of 10 influential American lawmakers asked President Trump to raise the issue of human rights abuses in Pakistan's Sindh province in his meeting with Khan. Protests have been planned in front of the White House and Capitol Hill Arena by these groups over the next few days.