The 22-year-old Warmbier was medically evacuated in a coma last week after nearly 18 months in captivity. 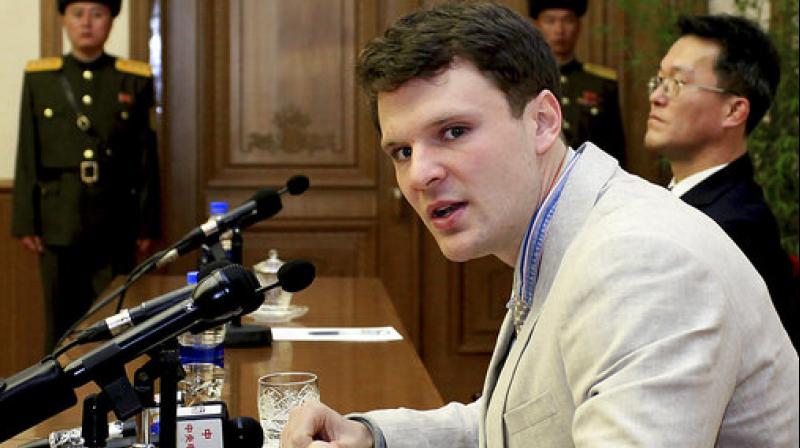 American student Otto Warmbier speaks as he is presented to reporters in Pyongyang, North Korea. Warmbier, an American college student who was released by North Korea in a coma last week after almost a year and a half in captivity, died Monday, June 19, his family said. (Photo: AP)

Washington: President Donald Trump called the death of one-time North Korean prisoner Otto Warmbier a "total disgrace" and appeared to take a swipe at the Obama administration for failing to bring the American student home before it was too late.

Sentenced to hard labor for stealing a political poster from a North Korean hotel, the 22-year-old Warmbier was medically evacuated in a coma last week after nearly 18 months in captivity.

Suffering from severe brain damage, he died Monday in his hometown of Cincinnati, Ohio, surrounded by family who decried his "awful torturous mistreatment" at the hands of Pyongyang, while taking solace in the fact he made it home before he died.

Warmbier was on a tourist trip when he was arrested and handed a 15-year sentence in March last year, a punishment US officials decried as out of proportion to his alleged crime. "It's a total disgrace what happened to Otto," Trump said during an event in the Oval Office. "It should never, ever, be allowed to happen. And frankly if he were brought home sooner, I think the result would have been a lot different."

The young man's father, Fred Warmbier, previously criticised former president Barack Obama's administration for how little he did for their son, saying officials had counseled the family against speaking out to avoid antagonising the North Korean regime.

"The results speak for themselves," the student's father said last week. Trump paid tribute to Warmbier's family, with whom he has spoken personally, saying "it's incredible what they have gone through."

A day earlier, the president slammed the "brutal regime" in Pyongyang, and said he was determined to "prevent such tragedies from befalling innocent people at the hands of regimes that do not respect the rule of law or basic human decency."

Trump's stern language was echoed by South Korean President Moon Jae-In, who said in an interview ahead of a White House visit next week that North Korea bears responsibility for the student's death.

"We cannot know for sure that North Korea killed Mr Warmbier, but I believe it is quite clear that they have a heavy responsibility in the process that led to his death," Moon told CBS television's "This Morning." Warmbier's release came amid mounting tensions following a series of missile tests by Pyongyang, in an arms buildup that Washington has dubbed "a clear and present danger to all."