President Donald Trump voiced confidence on Monday in his ability to win a repeat victory in Pennsylvania in 2020. 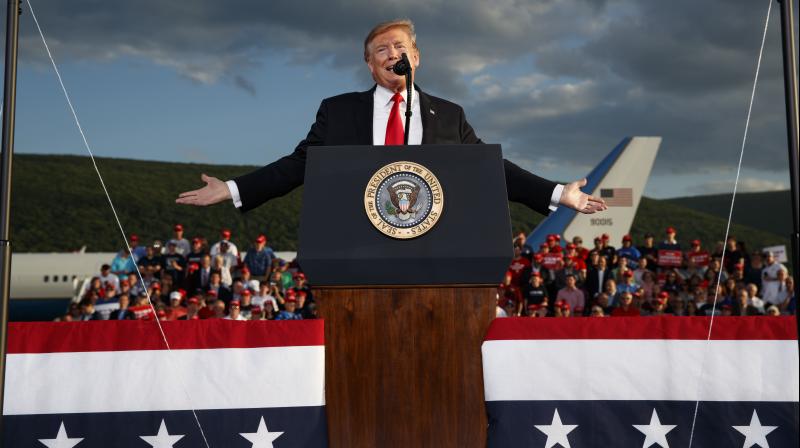 “We’ve got to win tomorrow, Fred,” Trump told a cheering rally crowd at a hangar at Williamsport Regional Airport. (Photo:AP)

Pennsylvania: President Donald Trump voiced confidence on Monday in his ability to win a repeat victory in Pennsylvania in 2020 and took a fresh swipe at one of his leading Democratic rivals, telling rallygoers that native son Joe Biden had abandoned them by representing Delaware in the Senate.

In fact, Biden moved to neighbouring Delaware with his family when he was a boy, and later represented the state in the Senate for more than three decades. He maintained ties to Pennsylvania over the years.

Trump’s Pennsylvania visit, intended to boost Republican congressional candidate Fred Keller over Democrat Marc Friedenberg in a Tuesday special election for an open House seat, had as much to do with helping his own reelection prospects as it did with pushing Keller over the finish line.

“We’ve got to win tomorrow, Fred,” Trump told a cheering rally crowd at a hangar at Williamsport Regional Airport.

“He left you for another state, and he didn’t take care of you,” Trump said. He also referred to the former vice president by the nickname he has coined for him: “Sleepy Joe.”

“Sleepy Joe said that he’s running to, quote, `save the world,”’ Trump said. “Well, he was. He was going to save every country but ours.”

Biden said on Monday in Nashville, Tennessee, that he is running on a pledge to restore the soul of America. He has frequently talked on the campaign trail about the president’s divisive rhetoric and said another four years of Trump would “fundamentally change the character of this nation.”

Trump uses his campaign rallies to disparage various Democratic candidates for president, but he has been heavily focused on Biden, suggesting he may be worried about the possibility of facing off next year against the longtime politician.

The president, who spoke in the open air with Air Force One behind him, highlighted the economy’s performance under his leadership and suggested those numbers make him virtually unbeatable.

Keller himself offered a rousing endorsement of Trump, saying he wants to go to Congress to be a vote for the president. Keller told Trump the people of this region of Pennsylvania “have been behind you since Day One, and, Mr. President, our support for you is as strong today as it ever was.”

Biden is making a big play for his native Pennsylvania, opening his presidential bid in Harrisburg and capping a three-week rollout with Saturday’s event in Philadelphia, the city where he also established his campaign headquarters.

In the fight to deny Trump reelection, no places will matter more than Pennsylvania, Michigan, and Wisconsin, three states the Republican president carried by razor-thin margins in 2016. Trump campaigned in Michigan and Wisconsin earlier this year.