Officers gave pursuit as the violent protesters melted away, and made several arrests. 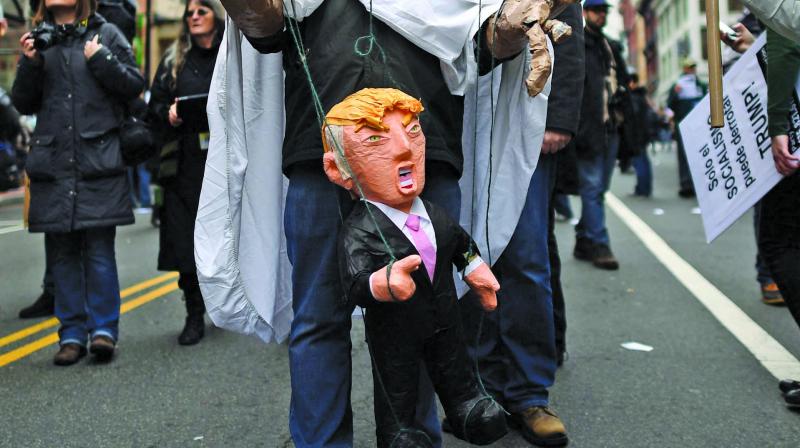 Police officers spray pepper on a group of protestors before the inauguration of Donald Trump in Washington, DC. (Photo: AFP)

Washington: Washington police fired pepper spray and made arrests after black-clad anarchists emerged from protests to smash windows on Friday ahead of Donald Trump’s presidential inauguration. As Trump, his supporters, former Presidents and other dignitaries gathered on the National Mall for the swearing-in ceremony, opponents marched in nearby streets and were confronted by a heavy police presence.

Most of the noisy protests— including those by an array of anti-racist, feminist, pro-immigration, anti-war and marijuana legalisation groups—were peaceful. But in at least one incident, masked youths emerged from the crowds to kick over trash cans and smash windows in shops, a bank and a fast food outlet and throw stones, as riot police deployed pepper spray.

Officers gave pursuit as the violent protesters melted away,  and made several arrests. At least one person was hurt and was seen receiving treatment for a head wound from paramedics. Black-clad groups with anarchist and anti-fascist banners could be seen moving at speed on the outskirts of the protest.

Marchers chanted: “No deportation, no KKK, no fascist USA!”A 27-year-old financial worker from Tampa Bay in Florida who did not want to give his name for fear of retaliation by his employer said Trump’s election victory had left him fearful. “There is nothing to hope for except for grassroots efforts to oppose him,” he told AFP.

Public interest lawyer Renee Steinhagen, 61, came down from New York to protest against Trump’s inauguration. “I’m doing this to express resistance to the change that await us,” she said. “This administration seems more extreme than any other. This is a simple act of resistance. It’s better than staying at home.” Groups of Trump supporters passed by the protests on the way to hail their hero, and some insults were thrown, but the two sides kept largely apart and violence was isolated.  Protesters said they feared Trump would be an extremist President.