Trump has signaled an intention to make a quick and clean break from the Obama administration. 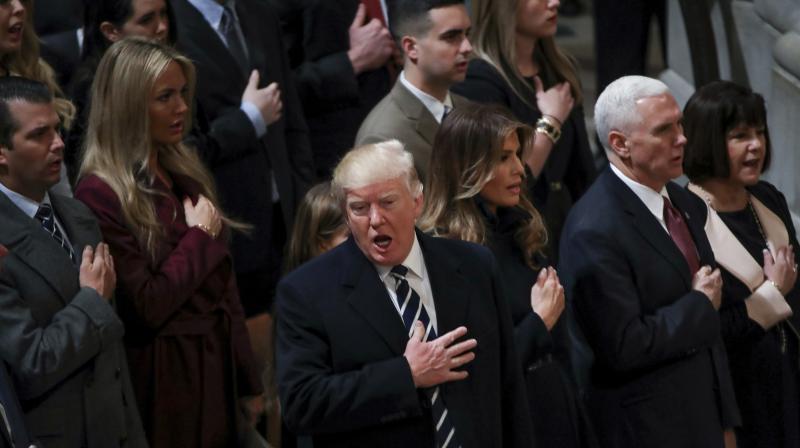 US President Donald Trump signs the National Anthem during a National Prayer Service at the National Cathedral, in Washington. (Photo: AP)

Washington: US President Donald Trump opened his first full day as president Saturday at a national prayer service, the final piece of transition business for the nation's new chief executive before a promised full-on shift into governing.

Trump and his wife, Melania, and Vice President Mike Pence and his wife, Karen, sat in a front pew at Washington National Cathedral for the morning service after a day of pomp, pageantry and protests that accompanied his Friday inauguration.

The interfaith service is a tradition for new presidents and is hosted by the Episcopal parish, but the decision to hold a prayer session for Trump has sparked debate among Episcopalians opposed to his policies.

The service took place as throngs of women, many of them wearing bright pink, pointy-eared hats, descended on the nation's capital and other cities around the world Saturday for marches organized to push back against the new president.

After church, Trump planned to visit the CIA for a meeting with members of the nation's intelligence community that could be fraught with tension.

Trump has sharply criticized top U.S. intelligence officials over their conclusions that Russia interfered in the 2016 election on his behalf, as well as over leaks about classified briefings he received in the weeks before his he was sworn into office on Friday. Trump has signaled an intention to make a quick and clean break from the Obama administration.

Before dancing with the new first lady at three inaugural balls Friday night, Trump signed an executive order aimed at former President Barack Obama's health care law. The order notes that Trump plans to seek the law's "prompt repeal." Meantime it allows the Health and Human Services Department and other federal agencies to delay implementing parts of the law that might impose a "fiscal burden" on states, health care providers, families or individuals. Trump also cleared the way for members of his national security team to take their places.

He signed legislation granting James Mattis, his pick for defense secretary, a one-time exception from federal law barring former U.S. service members who have been out of uniform for less than seven years from holding the top Pentagon job. The restriction is meant to preserve civilian control of the military. Mattis, 66, retired from the Marine Corps in 2013.

Separately, White House chief of staff Reince Priebus issued a memo aimed at freezing some new regulations and halting ones the Obama administration had started.

Trump, his wife, children and grandchildren spent Friday night at the White House. His daughter, Ivanka, and her husband, senior White House adviser Jared Kushner, were seen snapping photos Saturday on the Truman balcony with a young girl who appeared to be their daughter.

The Justice Department released a memo concluding the president's "special hiring authority" allows him to appoint Kushner to the administration and the move does not contravene federal anti-nepotism laws.

The dustup over the prayer service marked another example of the backlash against Trump by religious leaders, artists, celebrities and others.

While some in the largely liberal congregation objected to hosting the service, Bishop Mariann Budde of the Episcopal Diocese of Washington wrote in a blog post that she shared "a sense of outrage at some of the president-elect's words and actions" but also she felt an obligation to welcome all people without qualification, especially those who disagree and need to find a way to work together.