Little history made in US: Senator brings first baby on floor during vote

The historic decision enabled young children of senators to be brought onto the floor of the chamber during votes. 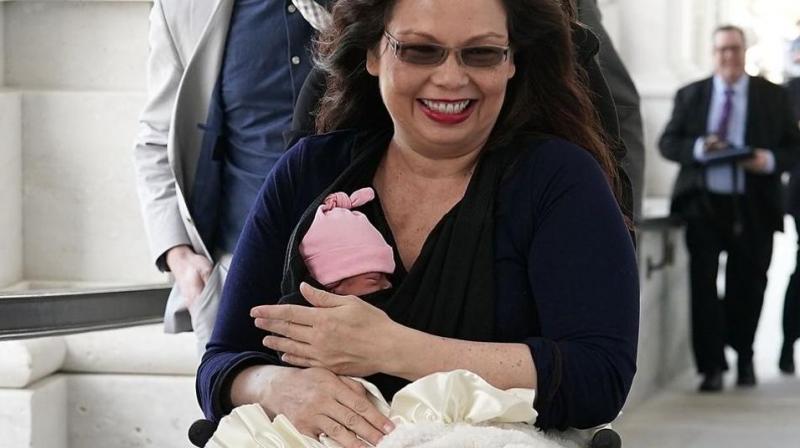 US senator Tammy Duckworth arrives at the US Capitol with her newborn baby daughter Maile Pearl Bowlsbey for a vote on the Senate floor on Capitol Hill in Washington. (Photo: AFP)

Washington: A little history was made in Washington on Thursday -- little in the form of a newborn who became the first baby ever to appear on the floor of the US Senate during a vote.

A swaddled 11-day-old Maile Pearl Bowlsbey arrived on the floor of the chamber carried by her mother, Senator Tammy Duckworth, as the Illinois Democrat came to vote on President Donald Trump’s nominee to become head of the NASA space agency.

The historic mother-daughter arrival was made possible by a change in Senate rules late on Wednesday, enabling young children of senators to be brought onto the floor of the chamber during votes.

Duckworth, an Iraq war veteran who lost both her legs and partial use of her right arm when her helicopter was shot down during combat in 2004, was greeted with applause in the normally staid Senate as she and Maile were wheeled into the chamber.

Duckworth flashed a “thumbs-down” to the Senate clerk to record her vote and then was rushed by fellow senators -- Republicans and Democrats -- eager for a glance at the chamber’s “first baby”.

Some reporters in the press gallery peering down at the floor action even let out audible coos, prompting Senate Democratic leader Chuck Schumer to gaze upward and quip: “The press is finally interested in something worthwhile.”

Vice-president Mike Pence was waiting in the wings, not to witness history in the making but in case he was needed to break a potential tie vote on James Bridenstine to become NASA administrator.

In the end, Pence was not pressed into action for the 50-49 vote confirming Bridenstine, which a pink-capped Maile slept through.