Trump urged people to vote for Gianforte, describing him as 'incredible Montana leader' and 'one of most respected people in Congress.' 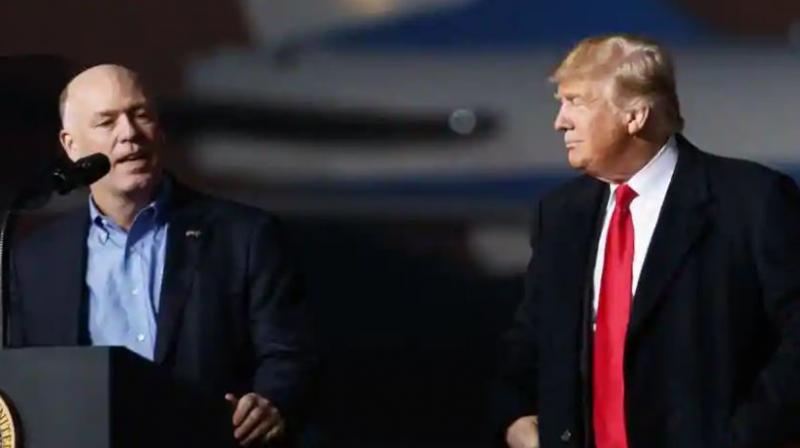 Washington: US President Donald Trump on Thursday praised a US congressman who assaulted a reporter, making light of the attack.

Greg Gianforte was sentenced to six months of deferred jail time, 40 hours of community service, 20 hours of anger management sessions and USD 385 in fines and court fees for the misdemeanor assault that propelled him and his congressional race into the national spotlight last year.

Trump's remarks at a rally in Montana come amid an international outcry over the disappearance of Jamal Khashoggi, a journalist who has been missing since entering Saudi Arabia's consulate in Istanbul on October 2, whom the president has said is likely dead.

At the rally, Trump urged people to vote for Gianforte, describing him as "an incredible Montana leader" and "one of the most respected people in Congress."

"By the way, never wrestle him," Trump said, referring to Gianforte's assault on The Guardian reporter Ben Jacobs. "Any guy that can do a body slam -- he's my kind of, he's my guy."

Trump said he originally thought the assault -- which took place on the eve of his election -- might hurt Gianforte's chances.

"Then I said, 'Well wait a minute, I know Montana pretty well, I think it might help him.' And it did," the president said.

"To celebrate an attack on a journalist who was simply doing his job is an attack on the First Amendment by someone who has taken an oath to defend it," he said, referring to the amendment to the US constitution that guarantees freedom of the press.

"In the aftermath of the murder of Jamal Khashoggi, it runs the risk of inviting other assaults on journalists both here and across the world where they often face far greater threats," Mulholland said.

Riyadh is suspected of murdering Khashoggi, a Washington Post contributor and US permanent resident whose writings have been critical of powerful Saudi Crown Prince Mohammed bin Salman.

Trump, who frequently criticizes what he terms the "fake news media" and has repeatedly described news organizations as the "enemy of the people," has been accused of setting a tone that condones abuses against journalists in other countries.