It was the first US military engagement with Iran following a series of increasingly serious incidents. 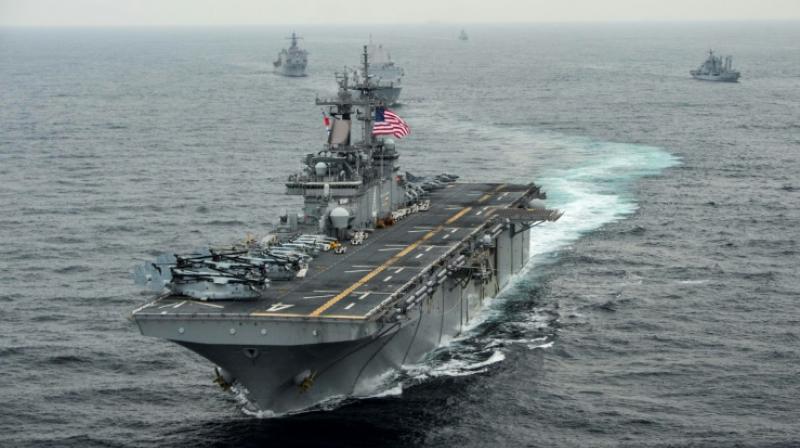 The drone was 'immediately destroyed' after it approached within 1,000 yards (914 meters) of the Boxer, Trump said. (Photo: AFP)

Washington: Tensions in the Gulf region mounted Thursday as US President Donald Trump said an Iranian drone was destroyed after threatening an American naval vessel at the entrance of the Strait of Hormuz.

It was the first US military engagement with Iran following a series of increasingly serious incidents.

Trump announced that the USS Boxer, an amphibious assault ship, "took defensive action" against the Iranian drone as it was "threatening the safety of the ship and the ship's crew."

The drone was "immediately destroyed" after it approached within 1,000 yards (914 meters) of the Boxer, Trump said.

"This is the latest of many provocative and hostile actions by Iran, against vessels operating in international waters," he added.

"The United States reserves the right to defend our personnel, our facilities and interests and calls upon all nations to condemn Iran's attempts to disrupt freedom of navigation and global commerce."

Tehran's top diplomat, Mohammad Javad Zarif, told reporters he had "no information about losing a drone today," as he arrived at the United Nations headquarters for a meeting with Secretary-General Antonio Guterres.

The apparent confrontation came as Iran defended its detention Sunday of a "foreign tanker" believed to be the Panamanian-flagged vessel Riah and its 12 crew for allegedly smuggling fuel.

"The vessel was en route to deliver contraband fuel received from Iranian boats to foreign ships in farther regions when it was intercepted," Revolutionary Guards' Sepahnews website said.

The incident comes after a series of low-level attacks in the region blamed on Tehran's forces, including placing limpet mines on several tankers and actions by what Washington calls Iranian proxies in Syria and Yemen.

In May the Pentagon announced the deployment of an aircraft carrier strike group and a bomber task force to waters near Iran in response to "indications of a credible threat by Iranian regime forces."

Tehran downed an American surveillance drone in June, prompting Trump to order air strikes against Iran. But he called them off at the last minute, saying the plan was not "proportionate" and casualties would have been too high.

On July 4 Britain seized a fully loaded Iranian oil tanker near Gibraltar, allegedly headed for Syria in violation of sanctions.

Iran furiously branded the seizure "piracy, and one week later armed Iranian boats menaced a British tanker in the Gulf, before they were driven off by a Royal Navy frigate.

That led to US calls for an international flotilla to escort hydrocarbon-laden vessels from Gulf oil fields through the Hormuz Strait.

The incidents have raised fears of a regional conflict involving the US and its allies in the Gulf region, through which nearly a third of the world's oil is transported.

It comes amid a threatened breakdown of the 2015 Iran nuclear deal, with Washington steadily ratcheting up economically debilitating sanctions on Tehran a year after unilaterally quitting the deal.

Earlier this month Tehran purposely surpassed the deal's caps on uranium enrichment, aiming to pressure the other parties -- France, Germany, Britain, China and Russia -- to break with the US sanctions escalation and defend the economic benefits Iran was promised for agreeing to drastic limitations on its nuclear program.

On Wednesday at the United Nations in New York, Zarif accused Washington of waging "economic terrorism."

The "unlawful, extraterritorial" sanctions "represent the greatest threat to the achievement of sustainable development goals of Iran and many of our neighbors," he said.

Washington nevertheless announced fresh sanctions Thursday on what it called a "network" of companies in Iran, Belgium and China supplying crucial materials to Tehran's enrichment program.

Yet both sides kept open the possibility of talks. The Guardian reported Thursday that Zarif said he had offered a new deal for enhanced inspections of Iran's nuclear program, if Washington agrees to remove sanctions.

Trump appeared to be receptive as well to negotiations.

He told reporters that the pressure on Iran had forced the country to reduce regional activities and suggested that could lead to negotiations.

"All we want to do is have a fair deal. The deal that was made was a bad deal... We can do something quickly or we can take our time. I'm in no rush."