The bill, which would slash corporate and individual taxes, has been criticized as primarily benefiting the wealthy. 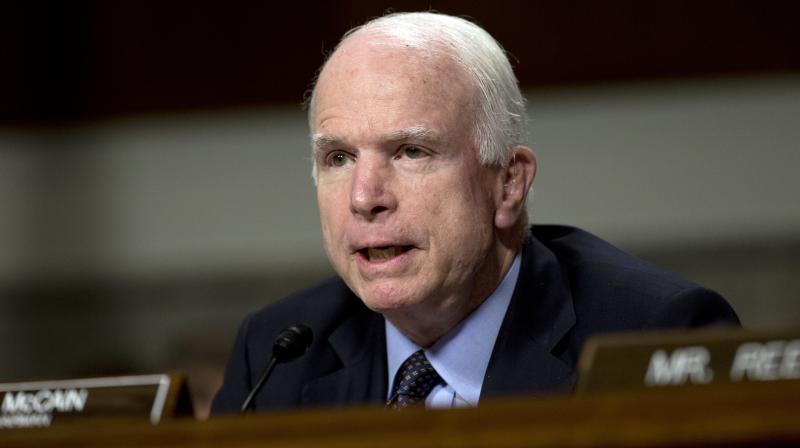 The veteran Republican lawmaker, 81, will not return to Washington until January, his office said on Sunday. (Photo: File)

Washington: US Senator John McCain will miss a key vote on the Republican tax bill because of a viral infection, further narrowing the already-thin margin of support for the controversial plan.

The veteran Republican lawmaker, 81, will not return to Washington until January, his office said on Sunday.

With McCain absent, the Republicans -- who have a 52-48 majority in the Senate -- can only afford one defection to pass the tax bill, with a vote expected in the coming days.

No Democrats or independents support the legislation in the Senate. It is expected to comfortably pass the House of Representatives.

The bill, which would slash corporate and individual taxes, has been criticized as primarily benefiting the wealthy.

It is President Donald Trump's last shot at a major legislative accomplishment in his first year in office.

McCain, the 2008 Republican presidential nominee, was diagnosed in July with a brain tumor known as a glioblastoma, after doctors found a blood clot over his left eye during a routine checkup.

The lawmaker "continues to improve" after receiving treatment for his viral infection, said his doctor Mark Gilbert.

"An evaluation of his underlying cancer shows he is responding positively to ongoing treatment," Gilbert added.

McCain's daughter Meghan said the celebrated Vietnam War veteran would be spending the holidays with family.

"My father is doing well and we are all looking forward to spending Christmas together in Arizona," she wrote on Twitter.

McCain's office said the senator will get physical therapy and rehabilitation at the Mayo Clinic.

"He is grateful for the excellent care he continues to receive, and appreciates the outpouring of support from people all over the country," it added.

"He looks forward to returning to Washington in January."

McCain has been critical of Trump and cast a crucial "no" vote on the president's effort to repeal and replace the Affordable Care Act, helping to save the Obama-era health care law.

Trump said he spoke with McCain's wife Cindy, and wished them well.

“I understand he'll come if we ever needed his vote, which hopefully we won't," Trump said after returning to the White House following a stay at the Camp David presidential retreat.

“He's going through very tough time, there's no question about it. But he will come back if we need his vote."