How Trump is being tested by North Korea and China

Trump has been very conscious of North Korea since 2013 and has tweeted about it more than 50 times in various contexts. 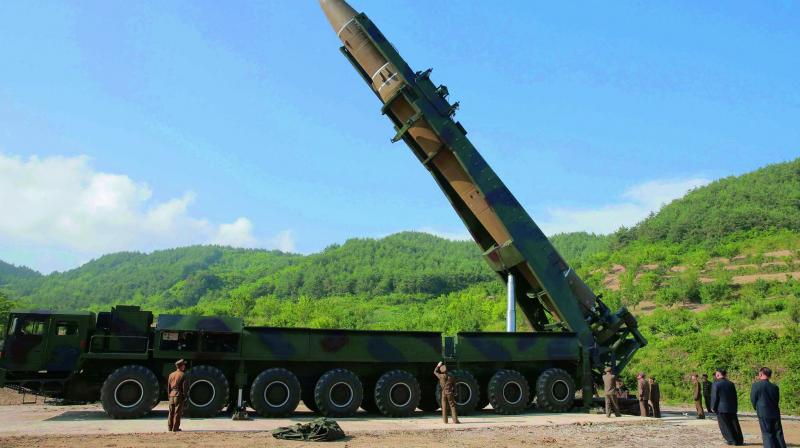 1946 born President Donald Trump may not recall the devastating Korean War (1950-53), but the Korean Peninsula has been an important US bastion to check the spread of unfriendly powers in East Asia since the end of the Second World War. The declared ideological enemy of the US in the post-war era was communism and the major adversaries were the then Soviet Union and the People’s Republic of China. This confrontation was played out first on the Korean Peninsula and later in India-China devastating these geographies. The cost to the United States in blood and treasure had also been high with questionable outcome.

The roots of the perceived intransigence of North Korea go deep into the history to the US-USSR bargain in 1945 leading to first de facto and late de jure division of the hapless Korean Peninsula.

The war-weary US soldiers of the Pacific theatre entered the Korean War in 1950, nursing a deep-seated racial hatred of the “yellow races”. Their treatment of North Koreans was brutal, inhuman and often sadistic. North Korean regimes have kept these bitter memories alive and have brainwashed their population to treat the US as an implacable enemy.

This consciously sustained paranoia against the US has been cleverly leveraged to manipulate the unfortunate North Korean masses and deny them any freedom or liberty to ensure dynastic succession.

Enough has been written regarding the motivation for the relentless quest of the Kims for nuclear weapons and delivery system as a shield against any future US misadventure against North Korea. But what about President Trump’s perception of North Korea? Does a nuclear North Korea pose a real threat to the US?

Since the Clinton era in the 1990s, successive US Presidents have followed different policies to contain, check and reverse the North Korean nuclear programme but have utterly failed. What is President Trump likely to do?

Mr Trump has been very conscious of North Korea since 2013 and has tweeted about it more than 50 times in various contexts. Mr Trump’s first reference to North Korea was in March 2013 when basketball star Dennis Rodman, who had appeared on Mr Trump’s The Apprentice, visited North Korea and presented a copy of Mr Trump’s book Art of the Deal to North Korea’s sports minister.

But in 2014, Mr Trump tore into Rodman for suggesting that he wanted to accompany Rodman to North Korea and tweeted: “Crazy Dennis Rodman is saying I wanted to go to North Korea with him. Never discussed, no interest, last place on earth I want to go.”

Businessman Trump also followed US policy towards North Korea and exhorted former President Barack Obama in a tweet in April 2013. “Mr President, it is time to lead on the Korean crisis. Make a statement from the Rose Garden and send a strong message to the man child.” This insulting referenced to Kim Jong-un would definitely have been noted by Pyongyang.

Mr Trump did not tweet about North Korea in 2015, but made it an issue in his presidential campaign to attack Mr Obama and presidential candidate Hillary Clinton in 2016. For instance, in 2016 after September 9 nuclear test by the North Koreans, he tweeted: “Russia has more war heads than ever, N. Korea is testing nukes, and Iran got a sweetheart deal to keep theirs. Thanks, Hillary Clinton.” He followed up in October 2016 and tweeted that Ms Clinton was weak on North Korea.

After assuming office, President Trump had tweeted about North Korea 17 times till July 4. After a missile launch, Mr Trump tweeted on March 17: “North Korea is behaving very badly. They have been playing the United States for years. China has done little to help.”

Thus, Mr Trump rightly and publicly identified that China was playing a double game and was not sincere in curtailing North Korea’s nuclear ambitions. On April 13, 2017, he tweeted that he had “great confidence” in China’s ability to rein in North Korea but left open the possibility that the US could act alone if China failed to do so. He leaned on China more by tweeting on April 21 that, “China is very much the economic lifeline to North Korea. So while, nothing is easy, if they want to solve the North Korean problem, they will.”

President Trump continued to place his confidence in China’s role and tweeted on May 29 after a North Korean missile launch: “North Korea has shown a great disrespect for their neighbour China, by shooting off yet another ballistic missile… but China is trying hard.”

President Trump shared his disappointment with China in a tweet on June 21, “While I greatly appreciate the efforts of President Xi and China to help with North Korea, it has not worked out. At least I know China tried.”

President Trump’s misplaced expectations from China were punctured after the July 4 launch of an alleged intercontinental ballistic missile (ICBM) by North Korea. This was a capacity, Mr Trump had repeatedly asserted that North Korea would not be allowed to possess. He tweeted that it was “hard to believe South Korea and Japan will put up with this much longer” and added, “Perhaps China will put a heavy move on North Korea and end this nonsense once and for all.” This tweet again signalled China to take some decisive steps against North Korea to halt its missile programme.

At his summit with President Xi Jinping at Mar-a-Lago on April 7, Mr Trump had offered a deal to China to link its massive exports to the US to some real outcome to check North Korean strategic ambitions. Following this course of action, Mr Trump tweeted twice on July 5. Without naming China he tweeted: “The US made some of the worst trade deals in world history. Why should we continue these deals with countries that do not help us?”

As the matter came before the UNSC and after talking to US Permanent Representative Nikki Haley, Mr Trump tweeted: “Trade between China and North Korea grew almost 40 per cent in the first quarter. So much for China working with us — but we had to give it a try.”

China continues to import garments, minerals, etc., from North Korea and almost all the North Korean imports, including petrol and fuel oil are from China.

It is a fact that UN sanctions against Iran had been much more severe as compared to those against North Korea because of the protective umbrella provided by China.

Ms Haley threw an open challenge to China on July 5 when she stated in the Security Council, “There are countries that are allowing, even encouraging, trade with North Korea in violation of UNSC resolutions. Such countries would also like to continue their trade agreements with the United States. That is not going to happen.” Ms Haley also warned both China and Russia against vetoing any resolution imposing stronger sanctions against North Korea.

In this background, fireworks were expected in the meeting between the US and Chinese Presidents when they met at Hamburg for the G-20 summit. What actually transpired has not yet come into the public domain but Mr Trump reportedly told Mr Xi: “I appreciate the things that you have done relative to the very substantive problem that we all face in North Korea.”

President Trump faces a serious challenge to his credibility. Both North Korea and its patron China have defied US entreaties with impunity. In the neighbourhood, Prime Minister Shinzo Abe has been weakened after his party’s loss in the Tokyo city elections. And new South Korean President Moon Jae-in advocates a softer and more conciliatory policy towards North Korea. In an attempt to defuse tensions, South Korean intelligence agency has announced that the July 4 North Korean missile launch was of an IRBM and not ICBM, thus incapable of reaching the US mainland.

The critical actor in this power play is China. Unless the US puts unacceptable pressure on China, North Korea would continue on the path of acquiring a strategic deterrent against the US. It is now for President Trump to take a call whether China is also “playing” the US?