World   Americas  16 Dec 2017  Will take ‘unilateral steps’ with Pak to fight against terrorism: US
World, Americas

Will take ‘unilateral steps’ with Pak to fight against terrorism: US

Under new strategy, US diplomatic, military, and economic resources are aligned in support of a negotiated settlement to terrorism. 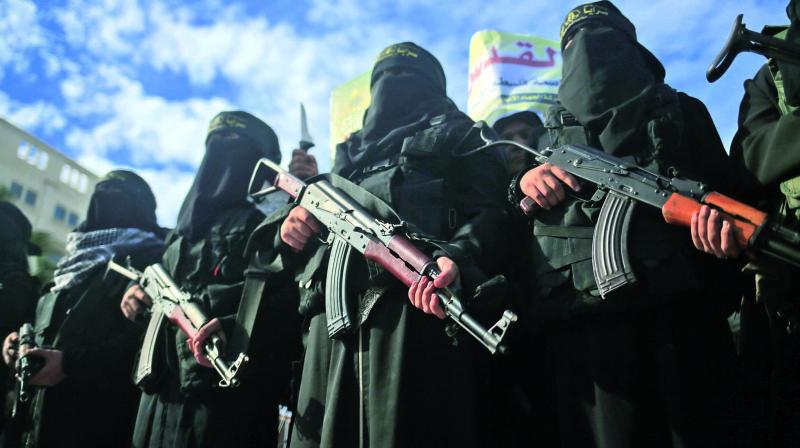 According to report, 'To move forward, we must see fundamental changes in the way Pakistan deals with terrorist safe-havens in its territory.' (Photo: Representational | AFP)

Washington: The US will take "unilateral steps in areas of divergence" with Pakistan in its fight against terrorism, the Pentagon on Saturday told Congress and insisted that there must be "fundamental change" in the way Islamabad deals with terrorist safe havens on its territory.

In its first report on Afghanistan to Congress after President Donald Trump announced his new Afghan and South Asia strategy, the Pentagon said it will be a part of a whole-of- government, regional strategy to isolate the Taliban from "sources of external support" and to mitigate any malign influence from outside actors.

"Our military-to-military relationship with Pakistan remains critical to the success of our mutual interests in the region," said the semi annual report titled 'Enhancing Security and Stability in Afghanistan' that covers events during the period from June 1 to November 30 in 2017.

"To move forward, we must see fundamental changes in the way Pakistan deals with terrorist safe-havens in its territory," the report said.

"To induce that change, we will work across the US government, using a range of tools to expand our cooperation with Pakistan in areas where our interests converge and to take unilateral steps in areas of divergence," it said.

The Af-Pak border region remains a sanctuary for various groups, including al-Qaida, al-Qaida in the Indian Subcontinent (AQIS), the Haqqani Network, Lashkar-e-Taiba, Tehrik-e-Taliban Pakistan (TTP), ISIS-K, and the Islamic Movement of Uzbekistan, it said.

"Sanctuary on the Pakistani side and presence on the Afghan side remain security challenges for both countries and pose a threat to regional security and stability," the department of defence said.

Although Pakistani military operations have disrupted some militant sanctuaries, certain extremist groups - such as the Taliban and the Haqqani Network - retain freedom of movement in Pakistan, it said.

"The United States continues to convey to all levels of Pakistani leadership the importance of taking action against all terrorist and extremist groups," the Pentagon said.

Increased collaboration between Afghanistan and Pakistan is critical to maintaining pressure on militant and terrorist groups and for meeting the enduring security requirements on both sides of the shared border, it said.

"The trust deficit resulting from Pakistan's support of and inaction against Afghan-oriented extremists, and Pakistan's concerns about terrorist attacks launched from Afghanistan, hampers the bilateral military collaboration required to achieve enduring security," the Pentagon said.

According to the report, the hard-won gains in Afghanistan remain fragile, but are worth defending.

Under the new strategy, US diplomatic, military, and economic resources are aligned in support of a negotiated settlement to this long-running war.

"We have recommitted to helping the Afghan government and people navigate through these challenges with a new approach that leverages additional support from allies, partners, and regional actors," it said.

"Our commitment is enduring but not unlimited, our support is not a blank check. As long as the Afghan government continues to show real progress and make real reforms, we will continue to support them as our strategic partners in the fight against international terrorism," the report said.

"The Taliban cannot win on the battlefield. They must know that their only path to peace and political legitimacy is through a negotiated settlement with the Afghan government," it asserted.