Trump in Helsinki for summit with Putin, slams US media over Russia criticism

Air Force One touched down at Helsinki Airport at 20:55 (local time) carrying Trump ahead of historic meeting with Putin on Tuesday. 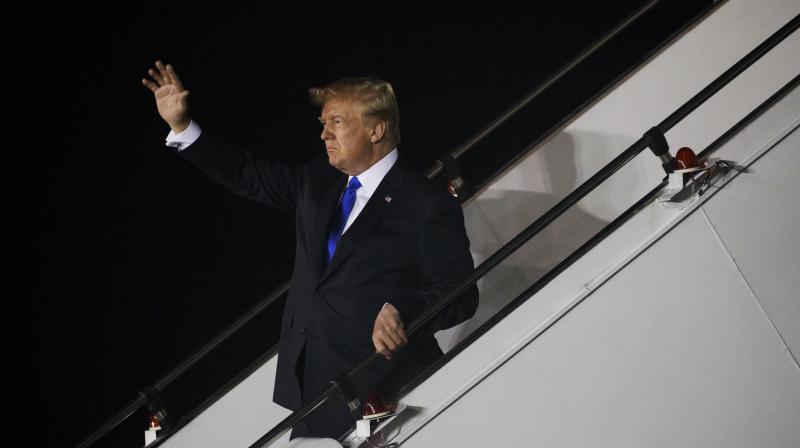 Astoria: US President Donald Trump on Sunday arrived in Helsinki for the first summit with his Russian counterpart Vladimir Putin after he lashed out at the media for being critical of his Russian policy.

Air Force One touched down at Helsinki Airport at 20:55 (local time) carrying Trump ahead of the historic meeting with Putin scheduled for Tuesday.

He was greeted by the US Ambassador to Finland Robert Pence before travelling to his overnight lodgings, media reports said.

Earlier, he had tweeted before leaving for the capital of Finland.

“Heading to Helsinki, Finland – looking forward to meeting with President Putin tomorrow,” Trump said in a tweet as he boarded Air Force One for Helsinki.

Heading to Helsinki, Finland – looking forward to meeting with President Putin tomorrow. Unfortunately, no matter how well I do at the Summit, if I was given the great city of Moscow as retribution for all of the sins and evils committed by Russia...

...know how to do is resist and obstruct! This is why there is such hatred and dissension in our country – but at some point, it will heal!

Trump’s meeting with Putin comes days after a federal grand jury indicted 12 Russian intelligence officials on charges of hacking the servers of the Democratic National Committee and that of its 2016 presidential candidate Hillary Clinton.

On Monday, host President Sauli Niinisto is scheduled to meet Trump in the morning before Trump and Putin sit down to a bilateral meeting first without aides and then with their teams of support staff, according to media reports.

Trump also congratulated France for winning the Football World Cup for the second time and congratulated Putin for a “truly great” tournament.

“Congratulations to France, who played extraordinary soccer, on winning the 2018 World Cup. Additionally, congratulations to President Putin and Russia for putting on a truly great World Cup Tournament - one of the best ever!,” he said.

“For the president, the challenges are certainly there, but I think he is genuinely looking forward to sitting across the table and trying to reduce the tension in a relationship where our collective blood pressure is off the charts high. And it’s not good for the United States and is not good for the world,” he told Fox News.

Responding to a series of questions, Huntsman said Trump’s chief negotiator and he had a good sense of what these issues were.

“He has a good sense of where he wants to go. He wants to improve this bilateral relationship and he wants to find ourselves on the same page and some of these common interest areas,” he said.

But at the same time there is no guarantee that this is going to work out, Huntsman cautioned.

In his tweet, Trump said that the hacking of the servers took place during the Obama Administration.

“The stories you heard about the 12 Russians yesterday took place during the Obama Administration, not the Trump Administration. Why didn’t they do something about it, especially when it was reported that President Obama was informed by the FBI in September, before the Election?” he asked.